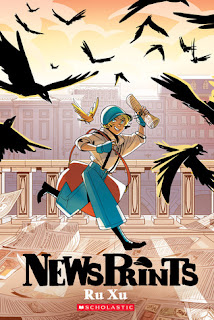 Blue is an orphan who disguises herself as a newsboy. There's a war going on, and girls are expected to help the struggling economy by selling cookies. But Blue loves living and working at the Bugle, the only paper in town that tells the truth. And what's printed in the newspapers now matters more than ever.

But Blue struggles with her secret, and worries that if her friends and adopted family at the Bugle find out that she's a girl, she'll lose everything and everyone she cares about. And when she meets and befriends Crow, a boy who is also not what he seems, together they seek the freedom to be their true selves...and to save each other from the effects of war.

Review:
I'm always on the lookout for kid-friendly, middle grade graphic novels, so this one peaked my interest when I saw the write-up.

Blue is an orphan living in Nautilene, a port city reminiscent of 1920s New York. Their country of Gosling has been at war with neighbouring Grimmaea for a decade, and the casualties have been many, including Blue's parents. Disguising herself as a newsboy, Blue lives at the Bugle, under the care and charity of the mayor and his wife. One day after hiding from a gang of other newsboys from a rival newspaper, Blue takes refuge in Jack's laboratory and later becomes assistant to the inventor. What Blue doesn't know is that Jack is one of the queen's advisor's in charge of weapon design, who fled from the capital of Altalus months prior. He's the key to winning the war, and the authorities want him to return. Jack meanwhile, is trying to locate a dangerous machine that he suspects is in Nautilene. While all this is going on, Blue meets Crow, a boy aptly named because he is always surrounded by crows and other birds. As Blue learns more about Crow, she discovers they both yearn to feel free to be themselves and make choices that allow them to be thus. Who is Crow, and what is the mysterious machine that Jack seeks?

This is a really clever title that incorporates some pretty deep themes in what appears to be a fairly straightforward story. Blue has to disguise her true gender because of the fear she'll be outcast by her surrogate family in times of war. Jack feels conflicted about his involvement in developing weapons of war, especially the human repercussions of it. Crow has desires of his own that he is pressured not to seek (hard to explain without delving into spoilers). It's surprisingly deep for a kid's graphic novel. I also love the nursery rhymes woven through the story. Blue's real name is Lavender Blue, Jack is frequently seen with a commander named Jill, the streets have names like Black Sheep Boulevard, it adds a certain amount of charm. The author's art style is aesthetically pleasing as well, you can see  some manga influences but not enough to be obviously so, and her colour palette is soft and earthy as well. 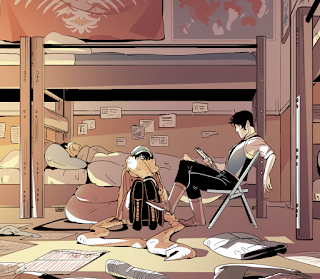 Recommendation:
A great title to add to a classroom library, especially for boys and other reluctant readers due to the sci-fi elements and how likeable and plucky Blue is as a character. It appears as if there will be subsequent volumes, and if so, I'll surely pick them up.

Thoughts on the cover:
I love Blue against the sunrise with the slew of crows flying around her, it's an awesome image.
Posted by Andrea at 9:06 PM