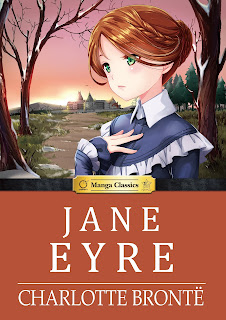 As an orphaned child, Jane Eyre is expected to be humble and grateful, but her wild spirit will not be tamed or broken despite the abuse she endures. As an adult, Jane finds her soul's match in the brooding Mr. Rochester, but their love is not enough to overcome the dreadful secret within the very walls of his estate.

Charlotte Bronte's classic tale of morality and social criticism takes on an entirely new life in this Manga Classics adaptation of Jane Eyre. Experience this immortal saga of passion and defiance in the face of adversity with stunning artwork that captures the Gothic glory of Thornfield Hall, the rugged charm of Mr. Rochester, and the fiercely independent essence of Jane Eyre herself.

Intended for a young adult audience, UDON's Manga Classics are just as likely to be enjoyed in the readers's free time as in the classroom. The gripping and intense story and the lush artwork will place them easily alongside today's bestselling popular manga, with strong and accurate adaptations that will please even the toughest teacher  or librarian! UDON's Manga Classics are also a great way for adult readers to rediscover their favourite classics, or experience them for the first time!

Review:
I'm a sucker for all things Jane Eyre, so picking up this was a given. This was also a chance for me to look at Udon's line of manga adaptations of classic novels, which I've been wanting to tackle for a while.

The first thing I noticed was how big these books were, the adaptations are pretty faithful to the originals and don't leave much out. In fact, this version leaves in a few elements that are usually cut from film and television adaptations such as Rochester singing and the gypsy incident. The artwork here is gorgeous, the characters look how they're supposed to but with your expected manga influences: Jane is your wide-eyed fiery heroine, Rochester is your rugged, strong, silent male; St. John is drawn with a bit of a bishounen flair to him, and Adele is your adorable girl child with hearts and flowers around her at times. The language here is very close to the original, so no surprises here if you've read it (or seen your favourite film adaptation) so many times you've got it memorized. These would be great for your reluctant readers, they're aren't a replacement for the originals of course, but I think they'd be great to get kids interested or to reinforce the basic story and plot if you're having a hard time getting students to consume their reading in traditional novel format. There are other titles in this line, such as Les Miserables, Great Expectations, Pride and Prejudice, and The Scarlet Letter, so not necessarily books that I personally teach in my school board and province, but are still great to look at for pleasure reading. 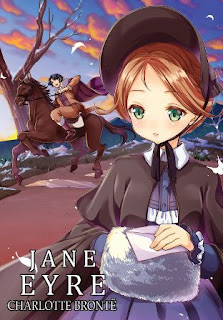 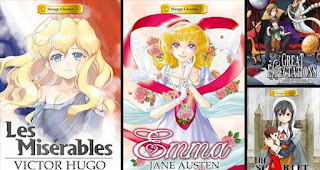 Recommendation:
A faithful adaptation and eye-candy all wrapped up in one, plus manages to make classics more palatable to younger readers. I'm quite impressed with this Jane Eyre adaptation and will be on the lookout for more from this line.

Thoughts on the cover:
Nice choice of image, especially with Thornfield Hall in the background. The art style shown is indicative of what you'll see in the rest of the book.
Posted by Andrea at 8:12 PM