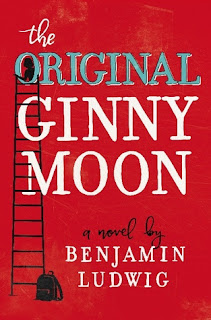 Meet Ginny Moon. She's mostly your average teenager - she plays flute in the school band, has weekly basketball practice, and reads Robert Frost poems for English class. But Ginny is autistic. And so what's important to her might seem a bit...different: starting every day with exactly nine grapes for breakfast, Michael Jackson,  taking care of her baby doll, ad crafting a Big Secret Plan of Escape.

Ginny has been in foster care for years, and for the first time in her life, she has found her "forever home" - a place where she'll be safe and protected, with a family who will love and nurture her. Though this is exactly the kind of home that all foster kids are hoping for, Ginny has other plans. She'll steal and lie and reach across her past to exploit the good intentions of those who love her - anything it takes to get back what's missing in her life. She'll even try to get herself kidnapped.

Told in an extraordinary and wholly original voice, The Original Ginny Moon is at once quirky, charming, bighearted, poignant, and yet also heartbreaking and a bit dark. It's a story of a journey, about being an outsider trying to find a place to belong, and about making sense of a world that doesn't seem to add up.

Review:
Whoo boy, this baby will surely be one of the big hits of 2017, the hype surrounding this is certainly well-deserved. I read the first 300 pages nearly in one sitting, it captured my attention right from the beginning, and Ginny is the reason.

Ginny is fourteen and autistic. She was recently adopted by Brian and Maura Moon, her "Forever Parents" and lives in the Blue House. She goes to school and plays Special Olympics basketball, loves Michael Jackson, and must have exactly nine grapes at breakfast. Because she was nine years old when she was removed from her birth mother's care due to physical abuse and neglect, which led to a string of foster homes that she ran away from before being adopted by her Forever Parents. Maura is expecting a baby soon, so Ginny is given an electronic baby doll to practice caring for her Forever Sister, but when Ginny stuffs the electronic baby in a suitcase to stop it from crying, her Forever Parents resume Ginny's sessions with Patrice, the attachment therapist. What follows is an amazing look into the mind of an autistic child dealing with the trauma of the loss of a parent and trying to figure out exactly where she belongs and what her role is after the upheaval she's experienced.

As someone who actually has experience in the foster and adoption system, one thing I'll say is that the author has captured the experiences of a child from this system so well in Ginny. Plus there's the added effect of her autism on those experiences, so it's like a double whammy of not only the trauma but Ginny trying to express herself properly and not always being able to. He includes little details that really signify that he not only knows this world but inhabits it: Ginny will hoard food not only for herself but for her Baby Doll, because she's not accustomed to having a dependable person around to actually provide it. She's obsessed with her Baby Doll because she was in a caregiver role at a very early age. She's not always comfortable around men due to Gloria's choice of abusive male figures.

One thing that doesn't fit in this whole scenario is that in my province, Ginny's adoption wouldn't have even been allowed to proceed due to Maura's pregnancy. We have an 18-month time period rule between adoptions or birth of children, so since Maura was already pregnant when the adoption was in the works, Brian and Maura wouldn't have been able to adopt Ginny until Baby Wendy turned 18 months old. We have this rule for issues of attachment, which would've prevented the problems in the book from escalating the way they did. But I appreciate that the author included that really low period in this book, because it shows that adoption isn't sunshine and rainbows, especially for kids from traumatic backgrounds with attachment issues....add in special needs and you've hit adoption bingo right there.

Moving away from the adoption aspect of the novel, the book flows really well and doesn't lag or have any slow periods that detract from the story in my opinion. Ginny is an amazingly well-developed character, and her voice as the narrator gives us a unique look inside her mind, which just makes me want to alternatively hug her and shake some sense into her (knowing quite well that shaking wouldn't work on an autistic child, but I think you get my meaning). You can't help but root for her, she's portrayed so sympathetically that even when she does negative things you know the reasoning behind it, you just want to be the poor kid's cheerleader.

Recommendation:
Buy this book when it releases in May, borrow it from the library, pass it on to friends, this one will be talked about widely and for good reason. As a teacher who has had the privilege of teaching autistic children and someone with experience in the foster/adoption system, this book really hits home and should be a must-read for anyone working with children in either system.

Thoughts on the cover:
It employs Ginny's favourite colour, which I think she would approve of. I like the little detail of her backpack at the bottom and Ginny's silhouette poking out of the O in the title.
Posted by Andrea at 9:56 AM