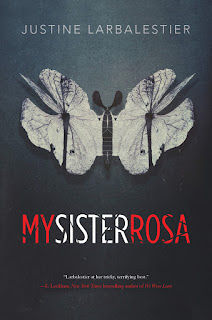 What if the most terrifying person you know is your ten-year-old sister?

Seventeen-year-old Aussie Che Taylor loves his younger sister, Rosa. But he's also certain that she's a psychopath - clinically, threateningly, dangerously. Recently, Rosa has been making trouble, hurting things. Che is the only one who knows; he's the only one his sister trusts. Rosa is smart, talented, pretty, and very good at hiding what she is and the manipulation she's capable of.

Their parents, whose business takes the family from place to place, brush off the warning signs as Rosa's "acting out." Now that they have moved again - from Bangkok to New York City - their new hometown provides opportunities for Rosa to play her increasingly complex and disturbing games. Che's always been Rosa's rock, protecting her from the world. Now the world might need protection from her.

Review:
Damn, this was one freaky, unsettling book...and it was awesome! I had a feeling it would be a good read nonetheless, based on my impressions of the author's previous book, Liar; but this was even more impressive than I had anticipated.

Seventeen-year-old Che and his ten-year-old sister Rosa are the products of very laid-back parents that insist on their children calling them by their first names as opposed to "Mum" and "Dad." Named after revolutionaries, Che and his sister are carted around from country to country every few months to a year, when Che would much rather be home in his native Australia. For his parents' latest business venture, they are taken to New York City, and Che has a few goals for his time in the city: keep Rosa under control, start sparing in boxing class, get a girlfriend, and go home to Sydney. The first proves to be the most difficult, mostly because Rosa is a certifiable psychopath. She lacks empathy, is reckless, doesn't care what anybody thinks, and is highly manipulative. Recently she's begun to manipulate people into hurting animals, and even though Che makes her promise not to hurt or kill anyone or anything, he knows Rosa lies.

This book was truly creepy once you got into it. Once you really see what Rosa's capable of, she becomes like all those creepy horror movie kids where you jump out of your skin a little once they pop up (and it's always suddenly, the little buggers), so the author does a good job of creating a tense atmosphere. I love how the book actually delves into brain science, and how the brains of psychopaths/sociopaths are actually different on brain scans than those of neurotypical people. The people that Che encounters in New York City are quite diverse and a real treat, especially Sojourner and Leilani (Sojourner's view of Christianity was a refreshing one, and Leilani is just freaking awesome).

Recommendation:
A must-read, purely for the subject matter, which I've rarely seen done in YA, and to be done this well is a credit to the author's amazing writing skills.

Thoughts on the cover:
Love how the cover echoes the butterfly reference from early on in the book, plus the whole package just looks creepy and already sets you on edge.