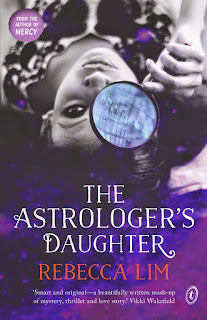 Avicenna Crowe's mother, Joanne, is an astrologer with uncanny predictive powers and a history of being stalked.

Now she is missing.

The police are called, but they're not asking the right questions. Like why Joanne lied about her past, and what she saw in her stars that made her so afraid.

But Avicenna has inherited her mother's gift. Finding an unlikely ally in the brooding Simon Thorn, she begins to piece together the mystery.

And when she universe a link between Joanne's disappearance and a cold-case murder, Avicenna is led deep into the city's dark and seedy underbelly, unaware of how far she is placing her own life in danger.

Pulse-racing and terrifyingly real, The Astrologer's Daughter will test your belief in destiny and the endurance of love.

Review:
I wanted to pick this up purely because it was a bit out there and very different from what I usually read. I think I chose well.

Eighteen-year-old Avicenna (love that name by the way) lives with her mom in Melbourne, recently moved to yet another new place due to the unwanted attention her mother receives from her work as an eerily accurate astrologist. When her mother suddenly disappears, Avicenna is faced with the task of helping the police figure out where she might have gone and what could have happened. When the police discover that Avicenna has inherited her mother's abilities (though she mostly refuses to use them), they ask her to finish up her mother's work on some unfinished jobs. With that, Avicenna puts herself in danger when she actually helps solve a cold case murder without getting any closer to figuring out what happened to her mom.

I loved the surreal feel in this book. The writing, the setting, Avicenna's personality, the astrological influences, everything comes together really well to make for an engrossing read. The only beef I have with it is the lack of closure at the end.

Recommendation:
If you're looking for something different with a mysterious and otherworldly (but not too out there) feel, give this a shot.

Thoughts on the cover:
Not amazingly impressive but I do like that the model is holding a magnifying glass.
Posted by Andrea at 9:50 PM