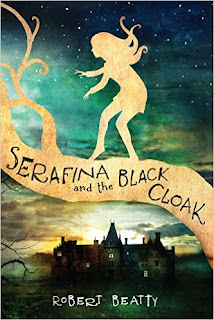 Serafina has never had a reason to disobey her pa and venture beyond the grounds of Biltmore Estate. There's plenty to explore in her grand home, although she must take care never to be seen. None of the rich folk upstairs know that Serafina exists; she and her pa, the estate's maintenance man, have secretly lived in the basement for as long as Serafina can remember.

But when children at the estate start disappearing, only Serafina knows who the culprit is: a terrifying man in a black cloak who stalks Biltmore's corridors at night. Following her own harrowing escape, Serafina risks everything by joining forces with Braeden Vanderbilt, the young nephew of Biltmore's owners. Braeden and Serafina must uncover the Man in the Black Cloak's true identity...before all of the children vanish one by one.

Serafina's hunt leads her into the very forest that she has been taught to fear. There she discovers a forgotten legacy of magic, one that is bound to her own identity. In order to save the children of Biltmore, Serafina must seek the answers that will unlock the puzzle of her past.

Review:
I have to say I haven't been this enamoured with a middle grade book in a while, this is one that is sure to please.

Serafina is twelve and lives in the boiler room with her father in the basement of the enormous Biltmore Estate in North Carolina in 1899. Her father is the maintenance man with the mind of an engineer, making sure the house is supplied with the electricity it needs to be as state-of-the-art as it is. He has told Serafina that she is not to be seen by the others in the house because he is afraid of them thinking ill of her, for Serafina is not like the other children. She has yellow eyes, four toes on each foot instead of five, is an accomplished hunter, and can see quite well in the dark, to the point that Serafina calls herself a "creature of the night" and grapples with the connotations that go along with it. But that doesn't stop Serafina from prowling around Biltmore at night, and it's during one of these nights that she witnesses a young girl visiting the estate being "consumed" by an eerie man in a black cloak. The next day as the adults search for the missing child and Serafina learns that this is not the first person to have gone missing from Biltmore, she vows to use her unique skills to track down who the man in the black cloak is and find out if the missing children are still alive.

First off, I have to give the author credit for a few things: setting the story somewhere different than what we normally see (North Carolina), and really doing his research on Biltmore Estate (yes it is a real place you can visit). There's a point in the book where Serafina is referred to as the mythological Diana, goddess of the hunt, and there's an actual statue of Diana on the grounds at Biltmore (I thought that was a nice touch). I only wish there had been a little author's note about the estate and maybe a photo, because it was hard to get a sense of the size of it just from reading, and upon researching it myself, I realized it's more like a large European estate or small castle than what I imagined when thinking of an estate in the southern United States at the turn of the century. See the actual Biltmore Estate below: 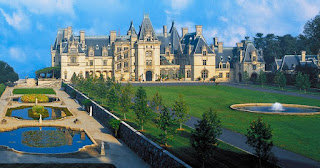 Moving on to characters, Serafina is a great character, and many things about her personality click into place upon the revelation about her past at the end of the book. She's spunky and fierce but also worries about herself as a person and whether she'll be accepted by others. Braeden was a charming addition, I just loved the little guy, especially how he clicks more with animals than people, which makes him odd in his upper-class setting. Braeden and Serafina make a good match as friends, and his dog Gidean makes a good character all on his own too.

The writing is well done, and I like how the author made things genuinely spooky without making it inappropriate for a middle grade novel, which makes it perfect read for Halloween.

Recommendation:
Excellent plot, writing, and characters; this is a must-read.

Thoughts on the cover:
Nicely creepy with Serafina's silhouette on the top with an imagined Biltmore on the bottom (but doesn't look like the real Biltmore).