How I Made it to Eighteen - Tracy White 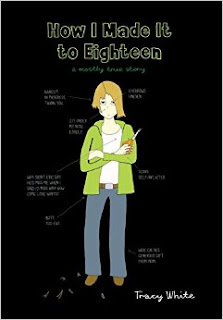 Hi,
This is the story of what happened to me when I had a nervous breakdown at seventeen. All the names and some details have been changed, but the following facts are true (mostly):

3. I admitted myself (checked into Golden Meadows Mental Hospital).

4. I detested it even though I wanted to be happy (miserable, but still missed my crap life).

5. I realized I was in trouble (realized it like feel-it-in-the-pit-of-my-stomach realized it).

6. I finally really talked (as in, stopped lying).

7. I wrote and drew this book (the one you are holding in your hands).

Review:
Based purely on the simple artwork on the cover, you wouldn't expect to be reading a fairly dark account of the author's stay in a mental hospital as a teenager, so this book isn't for every reader, but is definitely an interesting read.

The author, Stacy (real name Tracy, but all names have been changed) checks herself into Golden Meadows after she punches her hand through a window. Throughout her stay we see her interactions with the other patients and her doctors/counsellors, her denial and unwillingness to work with them at first but then reaches a breaking point and does make a change for the better. There's lots of heavy stuff here: drugs, depression, eating disorders, molestation, and bad relationships in general, so this isn't something every kid is going to want to read, but will surely hit home for some who may have been in similar situations. I like how the author had a focus on Stacy's friends at the end of every chapter where a question is posed to them about their relationship with Stacy, it's intriguing to see how the answers differ depending on what stage of life the friend was from and how some elements stayed the same regardless.

Recommendation:
A dark, heavy look into a teen's mental health recovery, so not for everyone but nonetheless important.

Thoughts on the cover:
The simplistic art shown on the cover is indicative of what you see throughout the graphic novel, which though it's refreshing, I prefer more intricate art.
Posted by Andrea at 11:37 AM