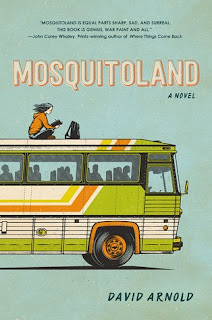 After the sudden collapse of her family, Mim Malone is dragged from her home in northern Ohio to the "wastelands" if Mississippi, where she lives in a medicated milieu with her dad and new stepmom. Before the dust has a chance to settle, she learns her mother is sick back in Cleveland.

So she ditches her new life and hops aboard a northbound Greyhound bus to her real home and her real mother, meeting a quirky cast of fellow travellers along the way. But when her thousand-milejourney takes a few turns she could never see coming, Mim must confront her own demons, redefining her notions of love, loyalty, and what it means to be sane.

Told in an unforgettable, kaleidoscope voice, Mosquitoland is a modern American odyssey, as hilarious as it is heartbreaking.

Review:
This book has had a lot of hype, mainly for being quirky, so I figured it was worth a read. In fact, it is quite quirky, I'm talking John Green kind of quirky.

Mary Iris Malone (Mim) is a hot mess, to put it lightly. Her parents are divorced, her dad quickly got remarried, her stepmom is pregnant, they moved her a thousand miles away from their home in Ohio to Mississippi (what Mim calls Mosquitoland), her dad thinks Mim is mentally unstable and forces her to take medication she doesn't really need, and to top it off, she learns her mom is sick back in Ohio. Mim takes off from school, raids her stepmom's coffee can stash of $800, and boards a Greyhound bound for Cleveland. Cue the quirky cast of characters including an adorable old lady named Arlene, a gruff but loveable bus driver, the cute guy in seat 17C, creepy Poncho Guy, a runaway with Down Syndrome named Walt, and more.

I quite enjoyed Mim's road trip journey, though it did drag a bit in the middle. Some parts felt a bit contrived and quirky just for quirky's sake, but overall I enjoyed the ride. Mim is headstrong and smart but makes some pretty ill-advised decisions along the way, which makes her a pretty realistic teenager. I wanted to smack Mim's dad upside the head several times (he needs therapy), and her stepmom Kathy does become pretty likeable in the end. I I have to admit I didn't get the point of adding Walt and Beck, I didn't feel they added much other than more quirk and a love interest that didn't really go anywhere.

Recommendation:
Worth the read if you're a fan of John Green-esque novels.

Thoughts on the cover:
I like the teal colour scheme, and Mim on top of the bus is a nice touch.
Posted by Andrea at 7:32 PM