A Book of Spirits and Thieves - Morgan Rhodes 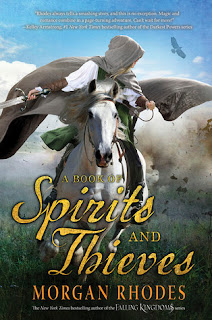 Worlds collide in this suspenseful, page-turning Falling Kingdoms spin-off series, which explores a whole new side of Mytica - and an even darker version of its magic.

Crystal Hatcher and her little sister, Becca, are working in the Speckled Muse, their mother's downtown Toronto bookshop, when an unexpected parcel arrives. Inside is an object that will change their lives forever: a large leather-bound book written in an unrecognizable language. When Becca opens it, she falls into a deep coma that sends her spirit to another world.

Meanwhile, on the ritzier side of town, Farrell Grayson parties away his parents' fortune. When the mysterious leader of a powerful secret society invites him to join his inner circle, Farrell seizes the chance to prove his worth - no matter how much he has to sacrifice.

Worlds away in Mytica, merciless goddess Valoria hunts for the elusive treasure that will make her ruler not only of her realm, but of all the unseen worlds that lie beyond it. But Valoria's plans are thwarted when Maddox Corso, a commoner, meets a pretty stranger from a faraway land who desperately needs his help. Her name is Becca Hatcher, and when Maddox realizes he's the only one who can see her, their meeting feels like much more than chance.

Review:
I haven't read the author's Falling Kingdoms series, the one that this book (the first in a new series) is based on, so keep in mind I have no background of the Falling Kingdoms universe.

The book contains three different narratives across two universes: Crystal and Farrell in modern-day Toronto, and Maddox in the high fantasy realm of Mytica. Crystal and Becca work in the Speckled Muse bookshop that has been in their family for generations, and when their Aunt Jackie sends the store a package with a mysterious book in it, it soon sends Becca into a coma while having no affect on Crystal. Farrell and his wealthy family are involved in a secret society lead by Markus King, a strange man with god-like powers that punishes evil not unlike a vigilante. In Mytica, Maddox, a boy with the magic powers of a necromancer, is thrust into a plot to overthrow the goddess Valoria, while also trying to help the spirit of Becca Hatcher return to her world. All these seemingly unrelated plots eventually intertwine quite well, and the voice of each of the three different narrations is quite distinct , so there's no confusion.

I really enjoyed the dual perspective of modern-day world alongside a high fantasy world (and can I say yay for the author being Canadian and setting the book in Toronto), it really made certain details interesting especially given the Canadian setting. Crystal is quite spunky and fiery, plus she's smart enough to figure things out and not allow herself to be taken advantage of. Farrell is a classic bad boy with an angst-ridden background that is really good deep down but makes some very bad decisions (and to be fair it's not entirely his fault). Maddox is sweet and doubts himself but really comes into his own by the end of the book. I felt like Crystal and Farrell were more developed than Maddox and Becca mainly because Crystal and Farrell's narratives tend to overlap since they deal directly with each other in Toronto, while Maddox and Becca we only see for one-third of the book.

There was some lag in the middle of the story between setting up the story and just waiting for something to happen, but the latter third of the book is where things pick up nicely, leaving things open-ended enough for the next book. The book is heavy on the dialogue, and it leaves a bit to be desired in that department, but the story is still engaging and worth the read.

Thoughts on the cover:
Not quite sure which character is supposed to be on the cover, but it's a nice image nonetheless.
Posted by Andrea at 12:47 PM