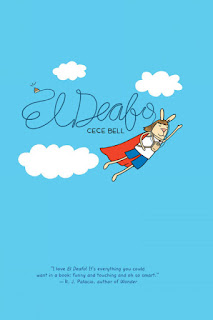 Starting at a new school is scary, even more so with a giant hearing aid strapped to your chest! At her old school, everyone in Cece's class was deaf. Here she is different. She is sure the kids are staring at the Phonic Ear, the powerful aid that will help her hear her teacher. Too bad it also seems certain to repel potential friends.

Then Cece makes a startling discovery. With the Phonic Ear she can hear her teacher not just in the classroom, but anywhere her teacher is in the school - in the hallway...in the teacher's lounge...in the bathroom! This is power. Maybe even superpower! Cece is on her way to becoming El Deafo, Listener for All. But the funny thing about being a superhero is that it's just another way of feeling different...and lonely. Can Cece channel her powers into finding the thing she wants most, a true friend?

This funny, perceptive graphic novel memoir about growing up deaf is also an unforgettable book about growing up, and all the super and super embarrassing moments along the way.

Review:
This graphic novel has won several awards and accolades, so of course it went in the to-read pile. Cece is growing up in the mid-seventies with her family when she contracts meningitis at the age of four, and subsequently loses her hearing. After being outfitted with a hearing aid, she can hear again, but not as clearly as she could before. She is fortunate to attend a kindergarten class for deaf children where her teacher instructs them how to read lips and use visuals, gestures, and context clues to fully understand when other people speak to them. After her family moves, Cece attends first grade in a regular classroom, so she is given a more powerful hearing aid that allows her to hear everything with amazing clarity so long as her teacher wears a microphone around her neck. Cece struggles to make friends, partly because of her hearing loss and partly from your average everyday social issues kids go through. Some of the friends she makes treat her differently because of her hearing aid and some don't, and along the way she learns how to navigate friendships and speak up for herself.

The superhero aspect is pretty cute. Cece refers to her superhero alter ego as El Deafo and considers the Phonic Ear (the special hearing aid she wears for school) to be her superpower. She longs for a sidekick (a good friend) to share adventures with, and through learning to communicate and open up she eventually gets her wish.

It's interesting to see this author's gripes about the hearing population portrayed here. As written in her afterward at the end of the book, every deaf person's experience is different: some prefer to use hearing aids and cochlear implants and some don't, some prefer to use sign language and some don't, some view their hearing loss as a disability and some don't. As a child, the author preferred not to use sign language and rely on her hearing aids and reading lips. She gets exasperated with one friend that insists on speaking slowly, emphasizing the syllables, because it affects Cece's ability to properly lip-read. She hates it when her friends turn off the lights at a sleepover while continuing to talk to her because she can't see their lips.

I found it interesting that the technology for the hearing impaired hasn't really changed that much, I've used a system that resembles Cece's Phonic Ear, though is much more aesthetically pleasing. As a teacher, I've used a microphone that amplifies my voice directly into a student's earpieces, as well as an FM system that amplifies my voice via speakers so it can be heard by all students, not just the ones with a hearing impairment. I have a mild hearing impairment (and had it as a child) and would've benefitted from these systems, so I'm glad that kids are better able to access these things.

Recommendation:
A great little graphic novel about growing up in general and with a visible difference. I would recommend this for junior, intermediate, and high school classrooms, it's sure to please.

Thoughts on the cover:
I like how Cece is shown in her superhero persona among the clouds. You can also see a good example of the author's drawing style, where all the people are drawn like rabbits (super cute!)