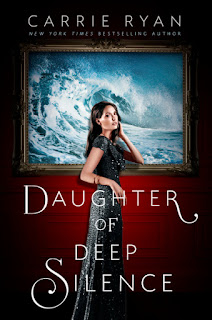 In the wake of the deadly devastation of the luxury yacht Persephone, just three souls remain to tell its story - and two of them are lying. Only Frances Mace, rescued from the ocean after torturous days days adrift with her dying friend Libby, knows that the Persephone wasn't sunk by a rogue wave as survivors Senator Wells and his son, Grey, are claiming - it was attacked.

To ensure her safety from the obviously dangerous and very powerful Wells family, Libby's father helps newly orphaned Frances assume Libby's identity. After years of careful plotting, she's ready to expose the truth and set her revenge plans into motion - even if it means taking down the boy she'd once been in love with: Grey Wells himself.

Sharp and incisive, Daughter of Deep Silence by Carrie Ryan is a deliciously smart revenge thriller that examines perceptions of identity, love, and the lengths to which one girl is willing to go when she thinks she has nothing to lose.

Review:
This book has received some hype recently, and I have read some of the author's previous books and enjoyed them, so I decided to give it a go. The premise sounded amazing: a disaster on a cruise ship,  few survivors, a cover-up of what really happened, years of plotting revenge, it all sounds great. However, despite the potential, this book didn't turn out to be all that great after all.

Frances Mace was fourteen when she went on a cruise with her parents, where she also met her new friend Libby, and fell in love with Grey Wells. When men with guns storm the ship, killing Frances' parents, Libby's mother, and the rest of the passengers save for Senator Wells and Grey, Frances and Libby are lucky to escape alive. They drift afloat on a life raft for several days until they are rescued, but Libby is already dead from exposure. Libby's father believes Frances' story about the ship being attacked, which is very different from Senator Wells' account of a rogue wave taking down the entire ship that he and Grey have since given all the media outlets since their rescue. In an attempt to keep Frances safe while they try to uncover the true story, Libby's father suggests to Frances that they claim that she herself died and take over Libby's identity instead. Frances agrees. Four years later, after Libby's father's death, Frances, living as Libby, returns to Libby's hometown in South Carolina from boarding school in Europe. Since the Wells also happen to live in the same town, Frances decides that the time has come to seek revenge.

There were two main factors which really prevented me from enjoying this book: the various unrealistic plot holes, and the romance (also unrealistic). First off, I find it very hard to believe that the Senator managed to orchestrate the plan to have the ship attacked without it being uncovered. You claim it was a rogue wave (really?) and everyone just believes you without checking the various scientific equipment that monitors weather conditions in the Atlantic? Libby's dad suggests that Frances just assume Libby's identity to protect her because it would be easier than try to adopt her the old fashioned way? And no one else attempts to interview or question Frances after the rescue that could uncover the ruse? And she agrees to plastic surgery to try to resemble Libby more than she already does? And nobody pulls up old pictures or otherwise figures out that "Libby" isn't really Libby? And after so many years, Cecil (Libby's dad) doesn't make any headway into uncovering the truth despite being rich enough that he could hire private investigators or have the privilege of being believed by the police if he came forward with the story? And Frances and Shepherd figure out how everything is connected in about 20 minutes of talking to each other?

And as far as the romance goes, Frances and Grey happen to fall madly in love after two weeks on a cruise at the age of fourteen? And they're still madly in love with each other four years after the fact? Most early teen romances are fleeting enough that an eighteen-year-old would cringe at the memory of a fling they had at fourteen, but nope, Frances and Grey are totally legit (yeah, right). And Frances isn't obviously revenge-obsessed enough if she's willing to overlook Grey's involvement in her parents' death long enough to engage in heavy make-out sessions. Sigh.

Recommendation:
Too many plot holes, unrealistic romance, not all that great in the grand scheme of things.

Thoughts on the cover:
Very pretty, I like how they incorporated Frances standing in front of the painting that hangs over Grey's bed.
Posted by Andrea at 11:31 AM