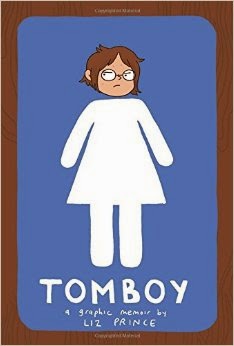 Growing up, Liz Prince wasn't a girly girl, dressing in pink tutus or playing pretty princess like the other girls in her neighbourhood. And she wasn't one of the guys, either. She was somewhere in-between. But with the forces of middle school, high school, parents, friendship, and romance pulling her this way and that, "the middle" wasn't exactly an easy place to be. Tomboy follows award-winning author and artist Liz Prince through her early years and explores - with humour, honesty, and poignancy - what it means to "be a girl."

Review:
My god, I wish this book had been around when I was a teenager, perhaps I wouldn't have had such issues about my femininity if it had. I've always described my level of girlyness as "middle of the road": I like stereotypical feminine colours but equally enjoy red, blue, and green; I have a weakness for all things cute and cuddly, I love purses and bags, can alternate between being coldly logical and fiercely emotional, and I prefer my clothing to be comfortable rather than pretty. I've never been much into makeup, hair, jewelry, clothes, shoes, glitter, celebrity gossip, or any of the other stereotypical things women tend to enjoy, which marked me as the "weird one" from early on. It wasn't until high school and university when I encountered groups of girls just like me that I began to realize that being a girl is about more than just what we see in the media or what the majority of women embody, that it very much means different things to different women. This book relives the author's realization of that same thought.

The beginning of the book was such a nostalgia trip, apparently the author and I are close in age so I could totally relate to identifying more with male characters and leads from 80s and 90s tv and film (at least until I discovered Japanese anime with their much more varied types of female characters). Like the author, I could also very much remember hating everything feminine until the high school years because it was so heavily pushed and I couldn't really articulate that I hated the limiting expectations and not the things themselves. The section on her middle school years rang true in many areas, especially about the bullying. We all sadly know that males who act stereotypically feminine often get teased/bullied/harassed or worse, but many people believe that a woman who acts stereotypically masculine won't receive that treatment, when in reality such a woman very much can. I remember having my sexuality questioned simply because I wasn't over-the-top girly, and there are stories of other girls who experienced much worse.

Recommendation:
This book absolutely needs to be read by teenage girls and young women everywhere, it really will be an eye-opener for some; it would have been for me if I hadn't already figured things out painfully on my own over the years. There is some very mild content about sex and drugs, so not for the kiddies, but this is definitely something that older readers will adore.

Thoughts on the cover:
Simple but poignant, especially once you realize the symbolism behind the author's use of the "women's washroom" figure.
Posted by Andrea at 9:14 PM