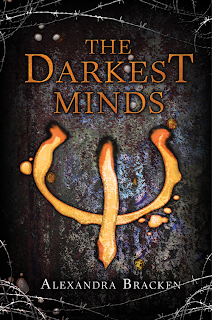 When Ruby woke up on her tenth birthday, something about her had changed. Something frightening enough to make her parents lock her in the garage and call the police. Something that got her sent to Thurmond, a brutal government "rehabilitation camp." She might have survived the mysterious fatal disease that had killed most of America's children, but she and the others emerged with something far worse: frightening abilities they could not control.

Now sixteen, Ruby is one of the dangerous ones.

When the truth comes out, Ruby barely escapes Thurmond with her life. She is on the run, desperate to find the only safe haven left for kids like her-East River. She joins a group of kids who have escaped their own camp. Liam, their brave leader, is falling hard for Ruby. But no matter how much she aches for him, Ruby can't risk getting close. Not after what happened to her parents.

When they arrive at East River, nothing is as it seems, least of all its mysterious leader. But there are other forces at work, people who will stop at nothing to use Ruby in their fight against the government. Ruby will be faced with a terrible choice, one that may mean giving up her only chance at having a life worth living.

Review:
I read the author's debut book, Brightly Woven, a few years back and fell in love with it. It still has a coveted place on my shelf. So when I realized that this new book with a lot of hype surrounding it was by the same author (I blame baby-brain for not clueing in sooner), I knew I had to scoop this up. The Darkest Minds is a very different genre than the author's first work, and a very different style as well, which will win over some readers for sure, but I didn't fall in love with this like I did with the debut book.

The book starts off wonderfully with Ruby describing the horrible, violent conditions in Thurmond; as well as giving background information about how children started dying from IAAN, how the survivors developed powers and were referred to as Psi, and how she ended up in the camp at age 10. Then there's a nail-biting escape scene where Ruby gets out of Thurmond with the help of the Children's League, a group supposedly devoted to getting Psi kids out of the camps. Then through her powers, Ruby discovers the Children's League isn't what they seem and she runs into Liam's group and they go looking for East River and the Slip Kid. And that's when the plot slows down. It's as if the motivation behind the plot goes kaput and nobody knows what the heck they're doing, probably because they really don't.

The secondary characters like Liam and Zu (Suzume) aren't developed nearly well enough, though I did like Zu quite a lot. Considering Liam is the love interest, I expected him to have some more depth to him...that and the relationship between him and Ruby goes from nothing to "I can't picture life without him" a little too quickly. Now I loved Chubs, I thought he was well developed and quite liked the guy, he would've made a better love interest than Liam, prickly though he is. Clancy is a nice balance between genius and psychotic, I got the shivers reading his scenes towards the end.

Some things were brilliant, like the nature of Ruby's power to influence behaviour and also see into people's memories but also erase them. But then using the cliche "I'm dangerous so you can't love me" thing made me want to smack my head against a wall. Some more background information at the beginning would have been nice, like exactly how the disease left some with psychic powers. Some parts of the plot like the double-crossing government groups were pretty easy to deduce, so not much surprise there. Granted, this is a planned trilogy, so a lot of this could be resolved in subsequent books.

Recommendation:
Lots of potential but doesn't quite deliver in all areas. I'll need to read the other books before I write this off completely, mostly because I really don't want to because I know the author is capable of awesomeness.

Thoughts on the cover:
At least it isn't a close-up of a girl's face. The Psi symbol in yellow-orange looks good against the black background.
Posted by Andrea at 8:51 PM