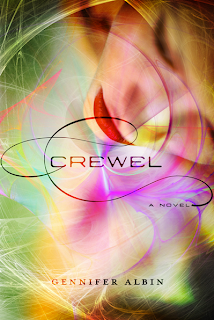 Enter a tangled world of secrets and intrigue where a girl is in charge of other's destinies, but not her own.

Sixteen-year-old Adelice Lewys has always been special. When her parents discover her gift-the ability to weave the fabric of reality-they train her to hide it. For good reason, they don't want her to become a Spinster-one of the elite, beautiful, and deadly women who determine what people eat, where they live, how many children they have, and even when they die.

Thrust into the opulent Western Coventry, Adelice will be tried, tested, and tempted as she navigates the deadly politics at play behind its walls. Now caught in a web of of lies and forbidden romance, she must unravel the sinister truth behind her own unspeakable power. Her world is hanging by a thread, and Adelice, alone, can decide to save it-or destroy it.

Review:
I picked this up because the book had been getting a lot of positive pre-release hype, and I was hoping that it was justified. Turns out it was, which made me a very happy blogger.

I have to give the author credit for her world-building, it is truly excellent. The novel opens with Adelice coming home from the mandatory testing that all girls in Arras have to undergo at age sixteen to find out who has potential to be a Spinster. Everything in Arras is woven into existence by Spinsters via mystical-like-thread-magic-that's-actually-science: people, food, weather, etc., and those things can just as easily be removed by ripping threads. I loved this concept, it isn't the first time books have used the concept of  weaving as an integral power, but this book is by far the most creative with this concept. There was just so much packed in here, and it's portioned out at appropriate times so that there's enough in the beginning to make it believable, and just enough revealed throughout the book to keep you hooked, wondering, "how the heck is this even possible, this is awesome!" Plus there's the political intrigue between Cormac and the rest of the Coventry, just enough for people to be interested and not too much to turn people off. Plus there's the undertones of repressive patriarchy, gender roles, homophobia, rebellion....it's an incredible plot, really.

Then there's Adelice. I loved her, mainly because she's so amazingly sarcastic in her interactions with the higher-ups at the Coventry, plus her name is awesome. She's such a firecracker, but at the same time is actually naive when it comes to human nature so it's a nice balance, she's more realistic this way. Cormac was a lovely bastardly character (and what novel is complete without one?), Maela is one of those evil characters you want to punch through the pages, Jost and Erik were more than fixtures that exist to be pretty and further the plot, and I hope they get some more depth throughout the next few books. Loricel surprised me at first because there usually aren't very many senior-aged characters in YA, and she is a fiery old lady to boot. And I loved Enora, she was so sweet.

Recommendation:
The plot is wonderfully creative and engaging, the writing is well-done, and the characters are endearing. Plus, there's more books coming (trilogy), what's not to love? Read this!

Thoughts on the cover:
The picture included for review here is of the North American release hardcover. Which is very pretty I must say. The swirls that invoke threads, the colours, I like it. The version I actually read was the UK paperback, which is a predominantly green cover with Adelice's face front and center. Although I admit the NA cover is more pleasing overall, I have to give the UK version credit for actually getting a cover model that looks pretty darn close to how Adelice is described: hair colour, eyes, nose, everything.
Posted by Andrea at 9:55 PM