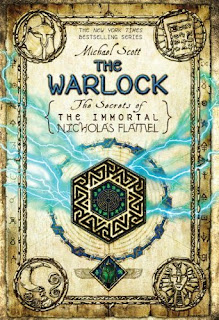 Summary:
From the author's website:
The twins of prophecy have been divided-the end has begun.

Alcatraz:
Although their ally Dr. John Dee has been declared utlaga, Machiavelli and Billy the Kid will follow the plans the Elders have laid before them: they will loose the monsters of Alcatraz on the city of San Francisco, thereby triggering the end of the humani race.

Danu Talis:
The Shadowrealm that Scatty and Joan of Arc have entered is far more dangerous than they could ever have imagined. And they haven’t landed here by chance-the warriors were called for a reason. So were Saint-Germain, Palamededs, and Shakespeare. The group was summoned because they must travel back in time to Danu Talis and destroy it. For the island of Danu Talis, known in humani myth as the lost city of Atlantis, must fall if the modern world is to exist.

San Francisco:
The end is finally near. Josh Newman has chosen a side, and he will not stand with his sister, Sophie, or with the Alchemyst, Nicholas Flamel. He will fight alongside Dee and the mysterious Virginia Dare. Unless Sophie can find her twin before the battle begins, all is lost – forever.

In the fifth installment of this bestselling series, the twins of prophesy have been divided, and the end is finally beginning.

With Scatty, Joan of Arc, Saint Germain, Palamedes, and Shakespeare all in Danu Talis, Sophie is on her own with the ever-weakening Nicholas and Perenelle Flamel. She must depend on Niten to help her find an immortal to teach her Earth Magic. The surprise is that she will find her teacher in the most ordinary of places.

Review:
For anyone who's not familiar with this series thus far, take a look at the first part of my review for the last book, The Necromancer, which will give you a bit of an idea of what this series is about.

On to this installment in particular. Since this is the second-last book in this series, we're gearing up for the big finale, so unfortunately this book suffers from the usual lag that tends to happen with series as things build up for the end installment. Dee and company are trying to unleash the monsters on Alcatraz, Scatty and company are trying to destroy Danu Talis, and Sophie and the Flamels are in San Francisco trying to save Nicholas and figure out their next move. Not much actually happens in this novel in terms of action, no big action or fight scenes, it's very sectional where each group is doing their own thing and all those plot threads come together right at the end to set the tone for the final book. Instead of action, we get a lot of backstory and flashbacks as the groups gear up for the big finale, we find out the relationships between a lot of the Elders and immortal humani, as well as information about Danu Talis back in the day.

This installment does end on a huge cliffhanger, which makes the year wait for the next and final book all the more frustrating, but I'm pretty sure that the last book will be amazing after all the setup in this one.

Recommendation:
For those of you that haven't read this awesome series yet, go read all 5 books thus far so you can join the club of anticipation for next year's finale. For those of you that are already fans of the series, this book isn't as amazing as previous ones were, but you need the info here to gear up for the last book.

Thoughts on the cover:
This series does a great job with continuity between all the covers. This time we have a gold colour scheme (it's shiny!) with a touch of blue-green lightning with all the symbols. I'm guessing they're going for Josh and Sophie's auras for these last books, so I'm going to guess that the last book will have a silver colour scheme since this one was gold for Josh.
Posted by Andrea at 5:32 PM