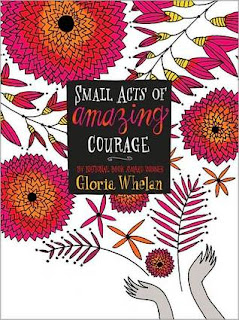 Summary:
From the inside cover:
How can kindness get you into so much trouble?

Ever since the death of Rosalind's brother, Edward, Rosalind's mother hasn't been the same. Rosalind's father is away at war, and his wish is for Rosalind to live in England and get a proper British education. England is home to Rosalind, but she has never been there. As an English girl in India in 1919, Rosalind is alone.

Rosalind awaits the return of her father from the war, and more and more she ventures out into the streets. It is there that she learns of a man named Ghandi and hears talk of how India must be free to rule itself. Then late one night, she makes a fateful discovery. She knows that seeking out the beggars who live under the bridge near the river is not where she should be, but she wants to help, even if her parents will never understand.

National Book Award recipient Gloria Whelan weaves a captivating story of love and family, secrets and sisterhood, and most of all, identity.

Review:
This book caught my attention a while back, and it turned out to be a really enjoyable short read.

It's 1919 in India and Rosalind's father is returning from the war more intent than ever to have his 15-year-old daughter shipped off to England for schooling like all the other British children born in India during colonial times. Since Rosalind's brother Edward died while at school in England before Rosalind was even born, her mother was insistent about keeping her remaining child in India, and has succeeded in getting her way up to this point. Edward's death also affected Rosalind's upbringing in other ways: Rosalind was raised with her ayah's daughter, Isha, so Rosalind identifies more with her than the other British girls, and truly loves India as her homeland. Rosalind has also been allowed to go gallivanting around the bazaars in town with Isha, something her father definitely would not have approved of had he been home and not off fighting in the war. When her father returns and sees exactly how unruly and independent his daughter has become in the years he's been away, he insists on sending her off to England. But along the way, Rosalind learns to stand up for what she believes in, taking a cue from Ghandi's philosophy, which in this case is supporting Indian independence and doing what is right instead of what is considered "proper".

I think the target age for this book might have been classified incorrectly. I loved the story and got the subtle elements and such, but in order to appreciate the story, you really need to have the background knowledge about British colonization and India's history under British rule, which not a lot of middle grade readers are going to have unless they're extremely well-read (heck, most of the kids I teach don't even know that Canada was a British colony at one point, let alone India). So I think slightly older readers with more historical knowledge might get more out of this book than the younger readers it's targeted to, but that's just my opinion.

The book is well-written, and Rosalind is a really admirable character based on all the 'small acts of amazing courage' she performs throughout the book. Rosalind really comes into her own and makes decisions based on what she believes is right, even though it alienates her from her family, which is a good lesson for kids to learn, to make decisions that you are happy with and not decide things based on what parents/friends/significant others think you should do. The imagery of India is really well portrayed here, the lush landscapes and the colours really come alive in the author's writing, and readers begin to love it as much as Rosalind does.

Recommendation:
Very enjoyable well-written book with a good message. Younger readers might not understand or appreciate it without background historical knowledge, but that's easily taught.

Thoughts on the cover:
I like it. The flowers and ferns in the pink and orange colour scheme are very vibrant, and the hands at the bottom are a nice touch.
Posted by Andrea at 12:40 PM