The Things That Keep Us Here - Carla Buckley 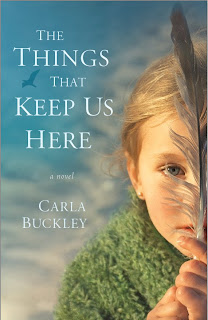 Summary:
From the inside cover:
How far would you go to protect your family?

Ann Brooks never thought she’d have to answer that question. Then she found her limits tested by a crisis no one could prevent. Now, as her neighborhood descends into panic, she must make tough choices to protect everyone she loves from a threat she cannot even see. In this chillingly urgent novel, Carla Buckley confronts us with the terrifying decisions we are forced to make when ordinary life changes overnight.

A year ago, Ann and Peter Brooks were just another unhappily married couple trying–and failing–to keep their relationship together while they raised two young daughters. Now the world around them is about to be shaken as Peter, a university researcher, comes to a startling realization: A virulent pandemic has made the terrible leap across the ocean to America’s heartland.

And it is killing fifty out of every hundred people it touches.

As their town goes into lockdown, Peter is forced to return home–with his beautiful graduate assistant. But the Brookses’ safe suburban world is no longer the refuge it once was. Food grows scarce, and neighbor turns against neighbor in grocery stores and at gas pumps. And then a winter storm strikes, and the community is left huddling in the dark.

Trapped inside the house she once called home, Ann Brooks must make life-or-death decisions in an environment where opening a door to a neighbor could threaten all the things she holds dear.

Carla Buckley’s poignant debut raises important questions to which there are no easy answers, in an emotionally riveting tale of one family facing unimaginable stress.

Review:
The Things That Keep Us Here is a pseudo dystopian story for adults. Ann and Peter Brooks are a couple on the brink of divorce living in Ohio while raising their two daughters. Peter is a university researcher and stumbles upon the emergence of avian flu (H5N1 in the novel) in North America. The virus then makes the jump from birds to humans and the country shuts down: air travel is suspended, schools are closed, fuel is scarce, food is scarcer, and utilities aren't working. Worse yet, this strain of the flu is killing half of the people that get it, which makes everyone beyond paranoid.

This book was frightening to read, simply because the subject matter hits close to home after the whole swine flu episode this past fall. The reason I classified this as realistic fiction is that it's very possible that we could find ourselves in a similar situation under the right circumstances, which makes this all the more freaky. Although, as the novel points out, in such a dire situation as the one described, it's not really the virus you need to worry about, it's the people you know and how quickly they abandon their humanity in the face of crisis. Aside from trying to juggle irrational behaviour from neighbours, Ann and Peter are trying to simply in lockdown in their own home. It makes you realize that no one can really prepare for something of this scale, you need months worth of non-perishable food, alternative cooking/heating sources for when electricity is out, gallons of bottled water for when tap water is not an option, candles, basic medical supplies in the event you can't get to a hospital, litres of gasoline for when fuel is impossible to find, not to mention medications and other specialized supplies for pets and babies. It's staggering. I went grocery shopping in between reading sessions, and I realized afterwards that reading the book affected what I was buying, it made that much of an impression. The novel deals with issues around letting yourself care about and love other people, and also issues of community and trust, a real eye-opening book in the age of pandemics.

Recommendation:
Don't read this if you scare too easily or are prone to lie awake at night due to anxiety you can't shake. It's an awesome book but some people just won't enjoy it because of the subject matter.

Thoughts on the cover:
Once you realize what the book is about, this cover is just creepy and unsettling. I think the little girl is supposed to be Maddie, the family's youngest daughter, and her holding a feather makes for a beautiful image, but still creepy.
Posted by Andrea at 6:06 PM