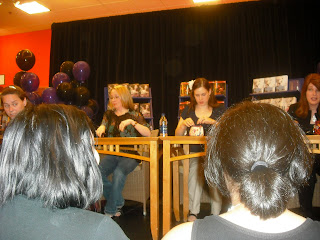 The HarperCollins Supernatural Summer Tour 2010 was my first ever book tour/book signing, mostly because we're in Canada and when these kinds of things do come up our way, they go to Toronto...and like most Canadians that don't live in Toronto, we have an aversion to driving into Toronto unless absolutely necessary (going in via public transit is another story cause Toronto subways rock).

Anywhoo, I've never done one of these before tonight, and my first impressions were nothing short of spectacular. The authors were: Lesley Livingston (author of Wondrous Strange and Darklight), Aprilynne Pike (author of Wings and Spells), and Kim Harrison (author of Once Dead, Twice Shy; and Early to Death, Early to Rise). The staff at Chapters Burlington handled everything very well, the host (Connie) was great, and the ladies themselves had great chemistry amongst the three of them so the discussion was really fun. There was a general discussion, followed by Q&A, then the signing. The general discussion started off with all three authors reading a short passage from their books and then doing their own little talk for a few minutes before moving on to the next person. Lesley Livingston is hilarious, completely geeky and book-ish and sounds just like some of my friends do when they're fooling around. Aprilynne Pike is just simply cute, that's the only way to describe her, she's just really sweet and bubbly. Kim Harrison is a seasoned author and seemed very professional during her talk. Some of the highlights were: finding out that an author has little to no influence in the titles of their books (all publishing/marketing's doing), finding out the joys of getting your book licensed into a movie by Disney and getting no say whatsoever in the process, listening to music during the writing process, whether authors are truly normal people or whether they end up being just a little nuts, and seeing Lesley do her version of the "happy author dance". All the authors signed whatever was brought to the talk, so that was really nice that they didn't impose a limit to only the books being promoted at the event, which means I got 6 books signed tonight! When Lesley was signing my books, I told her I was an English teacher and loved her Shakespeare references in her books and she even gave me a hint (since she can't reveal the title yet) as to the Shakespeare play her next book in the series was going to revolve around (after I figured it out....The Tempest!). All the ladies were super nice, not to mention funny, and everyone really enjoyed the night. We even got freebie swag bags from the publisher (after spending $50+ in books, you'll take whatever you can get for free).

This was the first stop in the Supernatural Tour period (it doesn't hit the US till next week), not to mention the first stop in Canada, so we felt pretty proud about that. We got two very famous American YA authors who'd never been to Canada before (so hopefully we made a good impression), plus a Canadian author who's just pure awesome. I'm still coming down from the high of tonight, I've been so psyched about this for the past month. So I got to meet my first authors and get some really nice signed copies for my classroom library...it's going to be really hard to loan these out to the kids now that they're signed, I don't want to let them out of my sight! 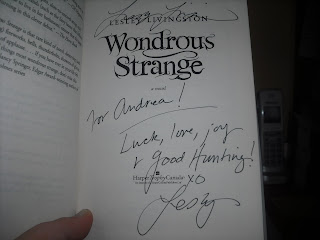 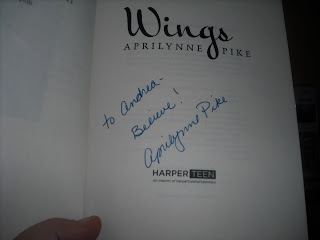 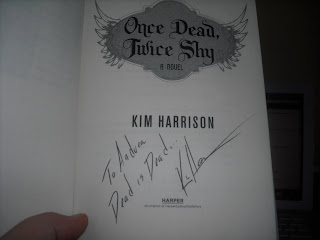