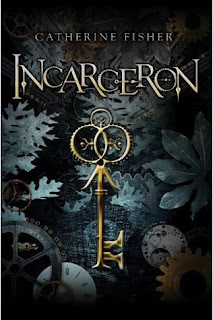 Summary:
From Amazon.com:
Incarceron -- a futuristic prison, sealed from view, where the descendants of the original prisoners live in a dark world torn by rivalry and savagery. It is a terrifying mix of high technology -- a living building which pervades the novel as an ever-watchful, ever-vengeful character, and a typical medieval torture chamber -- chains, great halls, dungeons. A young prisoner, Finn, has haunting visions of an earlier life, and cannot believe he was born here and has always been here. In the outer world, Claudia, daughter of the Warden of Incarceron, is trapped in her own form of prison -- a futuristic world constructed beautifully to look like a past era, an imminent marriage she dreads. She knows nothing of Incarceron, except that it exists. But there comes a moment when Finn, inside Incarceron, and Claudia, outside, simultaneously find a device -- a crystal key, through which they can talk to each other. And so the plan for Finn's escape is born ...

Review:
The concept and world-building in this novel is massive. Incarceron is a prison that encompasses cities, forests, wastelands, it is literally it's own world. Outside Incarceron, Time has stopped, meaning that progress has stopped. Claudia and the rest of the people at court parade around in 19th century clothing while secretly holding onto insanely wonderful technologies that they aren't supposed to use (they aren't even supposed to use washing machines). Finn is inside Incarceron and can only remember waking up inside it a few years previous, which makes him think he grew up Outside. While each of them works through both their problems (Finn simply surviving, Claudia with an arranged marriage she hates), both find crystal keys that enable Claudia to talk to Finn and vice versa. Then Claudia believes she knows who Finn really is. And if she's right, then collaborating with each other will solve both their problems.

It took me awhile to really get into this book because it is a little slow to build up, but once you're into it you just want to plow through to the end. I loved that the author made Incarceron like a character, the prison actually talks and is a living entity, it made it all that more creepy. I would have liked a little more background info on how things got to the way they were in the start of the novel, and some of the secondary characters fall flat, but the plot itself, as well as the main characters, are wonderfully written. There is a sequel, called "Sapphique", so hopefully some of my issues with background info will be addressed in the continuation.

Recommendation:
This is one of those immensely creative books that you have to read simply because it's different. I mean c'mon, a living prison, that's gotta be worth a read.

Thoughts on the cover:
I love how the colours give everything a tarnished metallic look to them, and that the image of the key is shiny (I like shiny covers). Much improved over the original UK cover, I think (probably one of the few times I prefer the US cover art).
Posted by Andrea at 3:41 PM