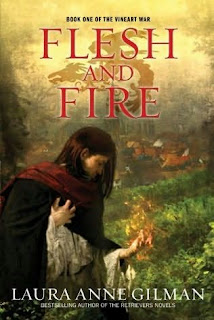 Summary:
From the author's website:
Fourteen centuries ago, all power was held by the prince-mages, who alone could craft the spell-wines. But the people revolted against harsh rule, and were saved by a demigod called Sin-Washer, who broke the First Vine, shattering the hold of the prince-mages.

In 1378 ASW, princes still rule, but Vinearts now make spellwines, less powerful than in days of old. Jerzy, a young slave, has just begun his studies to become a Vineart when his master uncovers the first stirrings of a plot to finish the work Sin-Washer began, and shatter the remains of the Vine forever. Only his master believes the magnitude and danger of this plot. And only Jerzy has the ability to stop it…before there are no more Vinearts left at all.

Review:
When I heard this was a wine-based fantasy, I knew I had to check this out. Being Italian, the idea of "magic wine" just makes me want to giggle, but the world of this novel was amazingly well built. Jerzy is a slave in the Vineart Malech's land and is just another invisible worker until Malech notices Jerzy's innate magical talent and takes him on as an apprentice Vineart. I loved how all Vinearts take their apprentices from their slave population, the reason given because the hard life of slavery apparently brings the magical ability out in those who possess it. Jerzy and Malech are both great characters, Jerzy is young and wants nothing more than to please those who took him out of slavery, Malech is one of those older male characters who appears cold but is really nice beyond the surface. The process of growing the grapes and crafting the spellwines was really creative and actually made sense, you could tell the author actually put some thought into this and didn't pull it out of nowhere. I loved seeing Jerzy's training and time with Malech, however since this is the first of a series and Jerzy and company didn't take off to investigate the problem until the very end of the book, I wasn't fond of the fact that there was all this build-up with no resolution at all, but of course that is coming in Book 2.

Recommendation:
If you're sick of your usual mage/dragon/sorcerer fantasy and want something unique, this is for you. There is mention of sexual abuse though, so a warning for people who are sensitive to that sort of stuff.

Thoughts on the cover:
I like it, but if that's supposed to be Jerzy on the front he looks older than he's supposed to be. He looks like he's in his 20s or 30s than a gangly 15-16-year-old kid.
Posted by Andrea at 4:13 PM