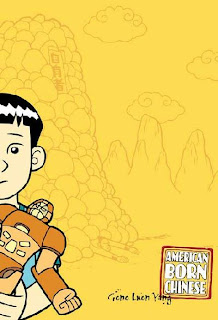 Summary:
From Amazon.ca:
As alienated kids go, Jin Wang is fairly run-of-the-mill: he eats lunch by himself in a corner of the schoolyard, gets picked on by bullies and jocks and develops a sweat-inducing crush on a pretty classmate. This much-anticipated, affecting story about growing up different is more than just the story of a Chinese-American childhood; it's a fable for every kid born into a body and a life they wished they could escape. The fable is filtered through some very specific cultural icons: the much-beloved Monkey King, a figure familiar to Chinese kids the world over, and a buck-toothed amalgamation of racist stereotypes named Chin-Kee. Jin's hopes and humiliations might be mirrored in Chin-Kee's destructive glee or the Monkey King's struggle to come to terms with himself, but each character's expressions and actions are always perfectly familiar. True to its origin as a Web comic, this story's clear, concise lines and expert coloring are deceptively simple yet expressive. Even when Yang slips in an occasional Chinese ideogram or myth, the sentiments he's depicting need no translation. Yang accomplishes the remarkable feat of practicing what he preaches with this book: accept who you are and you'll already have reached out to others.

Review:
I love graphic novels and this is the first one in a while that I've really been dying to read. I love reading stories about different ethnicities living in a mixed environment like America or Canada because I find I identify with them and that they end up being funny if you understand the other culture and the jokes they're trying to make. In Canada, especially the particular area of Ontario where I grew up in and still live now, I was very lucky in that there were a lot of families of Italian background that lived in my area, so I went to school with kids that were similar to me in that respect. I never had to deal with insults of a cultural nature, I dealt with insults about other stuff, but never because I was Italian. And for those that aren't aware, in Canada when we say that we are of a certain nationality, most of the time we really mean that that's our background since most of us are Canadian citizens and that goes without saying. The kids I teach get into patriotic discussions in class all the time, usually when sports is involved, and the kids will say, "I'm Portuguese and we can kick your butt any day of the week!", the kid most likely wasn't born in Portugal, they're more likely second or third generation.

Anywho, although I never dealt with the kinds of stereotyping described in American Born Chinese during elementary school (and even high school, my high school consisted of pretty much 2 ethnic groups), I did get my fair share during university when most of my friends weren't ethnic and called me a Whop on more than one occasion. Then I married my husband, whose family is as Canadian as you can get (meaning they originally came from Britain eons ago), and was the recipient of a few remarks about immigrants that made me want to smack certain family members. When my husband and I were in the process of planning our wedding, I wished I was marrying another Italian just to make things easier. My family never did any of the traditional Italian things on a day-to-day basis, but a wedding brings all the traditions out full speed and come hell or high water if anyone tries to interfere ('cause you will be frowned upon by the entire Italian community if you don't do certain things). That's what our wedding was like. Having to explain every custom to his family and justify having it, and at some point fighting for it till I was in tears because they just did not understand why we had those traditions. That experience made me hate being who I was culturally, albeit for a short time. And that's at the heart of American Born Chinese (see, my rambling had a point!)

American Born Chinese illustrates three stories that start out completely unrelated and eventually intersect at the end, so the stories aren't one-shots, you actually have to read each segment to get the full sense at the end of the whole thing. I loved the tale of the Monkey King/Journey to the West, I studied the originals in Asian Lit class in university and seeing pop culture takes on it are almost always hilarious. I loved Jin's story, especially how they introduce every Asian kid as coming from China, even the Taiwanese kid (which is like calling a Canadian an American, we really, really hate that). I actually found it hard to read the sections on Cousin Chin-Kee because he was such a complete stereotype, seriously bad (even his name made me shudder). The way all the stories intersect at the end is really pleasing, and the message of accepting who and what you are is one that people of all ages need reminding of from time to time. As for my husband and I, the wedding did not make me want to divorce him or his family, thankfully. I kept my Italian maiden name, as do women in Italy, and we now live a life balanced by both traditions (actually, my husband makes a better Italian than I do). We plan to raise our kids that way too (in addition to random things from Japanese culture throughout the house), so this way we won't have to wait to expose them to other cultures after they make some remark to another kid on the playground, hopefully we'll teach our kids about the fun of discovering other cultures rather than making fun of them.

Recommendation:
An excellent look at growing up a minority in suburbia. I think this would be a wonderful teaching resource for high school kids exploring stereotyping and discrimination, but I wouldn't give it to a group that wasn't anything less than completely mature, some of the material is so badly stereotypical that some kids would lose the point of the lesson and just make fun of everything (and worse, go and repeat it to another kid).

Thoughts on the cover:
I love the yellow colour, you never see that on book covers that often. It probably was done on purpose as a racial thing ("yellow" skin), and if not, it's an interesting coincidence. Jin is pictured along the front and back covers at the far sides so when you fold the book covers back you see the full image of him with his transformer. The background image is the Monkey King under the mountain, and even Chin-Kee shows up on the back cover.
Posted by Andrea at 5:08 PM