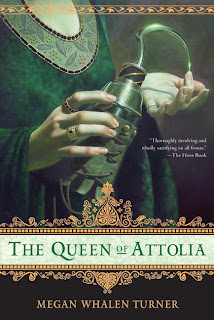 Summary:
From the back cover:
When his small mountain country goes to war with the powerful nation of Attolia, Eugenides the thief is faced with his greatest challenge. He must steal a man, he must steal a queen, and he must steal peace.

But his greatest triumph-as well as his greatest loss-can only come if he succeeds in capturing something the Queen of Attolia may have sacrificed long ago.

Review:
I had thought The Thief was good, but that it could've used more mature themes. The Thief was quite humourous, whereas The Queen of Attolia is darker by comparison. Eugenides is caught spying on the queen of Attolia and something happens to him that completely changes his personality. It's because of this incident that Eddis and Attolia go to war with each other, dragging Sounis into it as well. Eugenides falls into a deep depression and fails to notice the changing political landscape around him until the magus of Sounis essentially tells him to suck it up and look at what's going on around him. Propelled into action, Eugenides manages to use his cunning wit and intelligence to come up with a solution to the war...the only problem is getting the queen of Attolia to agree to it.

I liked this book much better than The Thief. The action moved along a lot quicker, and the subject matter was very much character-based (but balanced with plot and political intrigue once you got past the mid-point). Eugenides is faced with something he'd rather not deal with and hides from it, something we're not used to seeing from him. Attolia was an interesting character, where you only saw short little glimpses into her true self compared to the front she puts on to maintain control over her country. The interaction between Eugenides and Attolia were wonderfully written, but I'd hoped to see more glimpses into their supposed romance, because they aren't together very often all we have to go on is Eugenides' word that he loves her, though her love for him seems a little more believable (don't ask me why).

Recommendation:
If you like a political fantasy story with a good dose of character development, read this!

Thoughts on the cover:
I'll say one thing for this cover, I had no idea what exactly the queen was holding until about half way through the novel when I looked back at the cover and thought, "oh, that's what that is!", so kudos to this cover for stumping me (ouch, really bad pun, sorry Eugenides!).
Posted by Andrea at 5:13 PM