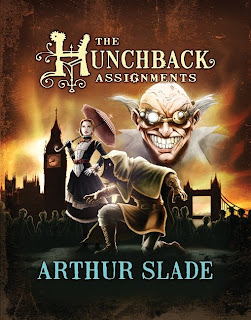 
Summary:
From the back of the book:
When Mr. Socrates, a member of the shadowy Permanent Association, hears of a hunchbacked infant with the ability to transform his appearance, he decides to take him in. Naming him Modo, he raises the boy in isolation, training him to become a secret agent.

When Modo turns fourteen, his education is complete. He must first survive in London on his own, then, with the help of beautiful Octavia, he uncovers a sinister plot being carried out in the very sewers beneath London.

Will they be able to stop the mad scientist Dr. Hyde and his even more terrifying associates before they unleash their monstrous plans upon unsuspecting Londoners?

Review:
I picked this up because someone recommended it to me to the point where I thought they must've written it because they praised it so much. This is probably the first time someone recommended a book to me that I didn't at least find tolerable. But hey, at least I read this one all the way through.

The novel takes place in Victorian-era England and has a lot of steampunk elements (basically science fiction concepts executed using steam powered machines). Mr. Socrates finds a hunchbacked infant in a gypsy freakshow that has the ability to change his appearance. He names him Modo and trains him in the art of being a secret agent of sorts with the intent of using him in his secret society when he is older. At the age of fourteen, Modo is taken from the only home he has known and Mr. Socrates leaves him to fend for himself as a test of his abilities. Along the way Modo meets Octavia and they work together to uncover a plan that will endanger all of Britain.

This book has a lot of promising concepts: Modo's ability to change his appearance, the relationship between Modo and Octavia, and the undercover agents switching between aristocracy and the lay people. They aren't developed enough though, it feels like you've only read half the book or that the book should be longer. The story feels like a blatant stitching of various classics: Modo's circumstances and disfigurements are taken out of The Hunchback of Notre Dame (they even said he was left in front of the same church). Dr. Jekyl and Mr Hyde is referenced through the character of Dr. Hyde as well as the tonic taken by Oscar and the other victims that changes their personality and actions drastically. Frankenstein comes in when Dr. Hyde creates near cyborgs from his human experiments. Granted there are a lot of stories that borrow from other novels, authors do it all the time without really knowing, but some authors do it with class and finesse...that's not present here, it feels like an excuse to not come up with more creative character names. Seeing as though most of my students aren't as well read as I'd like them to be, a lot of kids simply won't notice the references.

The story wasn't all that stellar either. The first half of the book is taken up with developing Modo and setting him up as a decent character and then you get the rushed action at the end trying to solve the issue with the huge mechanical body and why there's a bunch of wolf-like children running around London. Apparently this is the first in a series so that explains a few things, but you can still have a series of novels with well done one-shot plots strung together to make a cohesive story overall, too bad this isn't one of them.

There are some things I liked about this book. The writing is amazing, and since it takes place in Victorian England there is a wonderful use of higher level vocabulary that I wish kids would use, or at least understand (when our students don't understand the word "function" in the context of a sentence, you know their vocabularies have gone down the toilet). Again, there's some great concepts here, I just think they need to be fleshed out a bit and we'll have a really good series here.

Recommendation:
A decent example of steampunk, but there are better ones out there. Might be a good book for a boy looking for some action (but can sit through character development in the beginning).

Thoughts on the cover:
This thing looks like a bad movie poster. Cartoon-style villian Dr. Hyde at the top (can he look any more cliche?), Octavia at the left, and Modo in the centre. The US cover (the picture and description is of the Canadian cover) looks much nicer, shades of blue with hooded Modo scaling a building looking down over London. The US cover actually makes the book seem more grown up.
Posted by Andrea at 5:17 PM