The Ballad of Songbirds and Snakes - Suzanne Collins 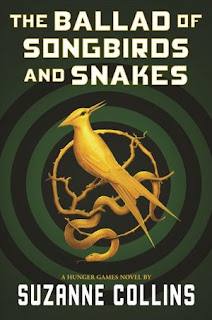 Ambition will fuel him.
Competition will drive him.
But power has its price.

It is the morning of the reaping that will kick off the tenth annual Hunger Games. In the Capitol, eighteen-year-old Coriolanus Snow is preparing for his one shot at glory as a mentor in the Games. The once-mighty house of Snow has fallen on hard times, its fate hanging on the slender chance that Coriolanus will be able to out charm, outwit, and outmaneuver his fellow students to mentor the winning tribute.

The odds are against him. He's been given the humiliating assignment of mentoring the female tribute from District 12, the lowest of the low. Their fates are now completely intertwined - every choice Coriolanus makes could lead to favour or failure. triumph or ruin. Inside the arena, it will be a fight to the death. Outside the arena, Coriolanus starts to feel for his doomed tribute...and must weigh his need to follow the rules against his desire to survive no matter what it takes.

Review:
Earlier this year when I first heard that there was going to be another book set in the Hunger Games universe, I was excited. I didn't even care that it wasn't about Katniss, until news came out that the protagonist was going to be President Snow as a young man. That gave me pause. Not enough to make me not want to buy the book, but it did make me wonder what a tall order it was going to be to make me care about the younger version of the original series' chief antagonist. I have to give it to Suzanne Collins, she not only made me care about a young Snow enough to read a whole book about him, but proved that she's still got it as a writer even a decade after writing her famous series.

The story begins in the Capitol barely ten years after the infamous war mentioned in the original books has ended. The Capitol as we know it from the original series is shiny, modern, and rich. The immediate post-war Capitol is anything but. For anyone who knows their history, think of Germany after WWI or all of Europe immediately after WWII. Eighteen-year-old Coriolanus Snow has lost both his parents, as has his older cousin Tigris, and they both live with their grandmother in the once-lavish but currently decrepit family townhouse. Coriolanus needs a university scholarship in order to feed his family and pull them out of poverty, which he will win if the tribute he is being paired with wins the upcoming Hunger Games. With viewership levels falling, the Capitol is experimenting with new ideas to make the Games more appealing, and this is the first year mentors are being used, except instead of district winners being the mentors like in the original series, they are using Capitol students from the academy.

Since Coriolanus is not Dean Highbottom's favourite, he is assigned to the female tribute from District 12, small and understated. Coriolanus has little hope of winning, until he sees Lucy Grey Bard in the reaping footage, and hears her sing. With no real fighting skills, he plans to play up her cunning and charisma, but that hinges on the assumption that she actually trusts a Capitol boy to get her through the Games.

This book not only makes Coriolanus Snow sympathetic, but it also his fellow classmates. This book adds in the idea that it isn't only the districts that are suffering due to the Capitol's tyranny, and this is clearly shown through the daily grind that Coryo and his friends go through. Some of his classmates and their families weathered the war relatively unscathed, but the food shortages affect even the most influential families, to the point where the main perk of attending the academy is that the students are well fed while in attendance. The Gamemakers' decisions also lead to accidents and death not only for the tributes, but the Capitol students as well. The themes of trauma and how it shapes a person, war and its effect on society, and the degree to which people will go to in order to save themselves are well displayed here and both complement and add to the themes explored in the original trilogy.

Coryo is admittedly a likeable character for most of the novel, it's hard to believe he's the younger version of President Snow from the first series, but granted, that is the whole drive to this book, to discover how Coryo became the Snow as we know him 65 years after the fact. Lucy Grey is a stereotypical manic pixie dream girl, but a likeable one; and I enjoy how songs from the first series were incorporated through her. Sejanus is a favourite of mine (poor tormented Sejanus), and his friendship with Coryo is well developed. It's amazing how the author managed to not only name every tribute and Capitol student, but also gave most of them some area in which to develop their character so they weren't merely a name.

Recommendation:
If you're a fan of the original Hunger Games trilogy, it's worth picking up this newest instalment. Don't let the fact that the protagonist is a young Snow put you off, trust me, the author makes it work, and it's just as good as any of the first books were.

Thoughts on the cover:
I really appreciate cover continuity, even with more than a decade between books. With the black, red, and blue colour schemes of the first three books, the choice to go with green here fits well.
Posted by Andrea at 11:34 PM