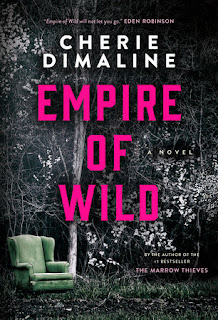 "Joan had been searching for her lost husband for eleven months and six days, since last October when they'd fought about selling the land she inherited from her father and he'd put on his grey jacket and walked out, the screen door banging behind him."

One hung-over morning in a Walmart parking lot in a little town near Georgian Bay, broken-hearted Joan is drawn to a revival tent where the local Metis have been flocking to hear a charismatic preacher. By the time she staggers into the tent the service is over, but as she is about to leave she hears an unmistakable voice.

She turns, and there is Victor. Only he insists he's not Victor, but the Reverend Eugene Wolff, on a mission to bring his people to Jesus. And he doesn't seem to be faking: there isn't even a flicker of recognition in his eyes.

With only two allies - her odd, Johnny Cash-loving twelve-year-old nephew, Zeus, and Ajean, a foul-mouthed euchre shark with a deep knowledge of the old ways - Joan sets out to remind the Revered Wolff who he really is. If he really is Victor, his life, and the life of everyone she loves, depends upon her success.

Inspired by the traditional story of the Rogarou - a werewolf-like creature that haunts the roads and woods of Metis communities - Cherie Dimaline has created a propulsive, stunning and sensuous novel.

Review:
After reading The Marrow Thieves a couple years ago, I knew I'd read anything this author wrote. When I discovered she had written a second novel, and not YA, I picked it up immediately. Ultimately, this is an adult version of Little Red Riding Hood (but with werewolves) set in Ontario with Indigenous characters and backdrop.

Joan, from the town of Arcand, is in her mid-thirties and searching for her missing husband. While her family tries to gently tell her that Victor probably just left her and that she needs to stop her constant searching, Joan refuses to give up on him. After a night drinking, she finds a Christian mission setting up in a parking lot. Led by a man named Heiser, the group travels around northern Ontario to Indigenous communities that just happen to be in negotiations with natural resources companies over the use of their traditional lands. When Joan recognizes the Revered Wolff as her missing husband, she endeavors to make him remember her.

Joan is great character, she's fiery and determined and very well-developed. The supporting cast isn't as fleshed out as Joan sadly, but I think if the novel had been a little longer that could've been achieved. The plot grabs you right at the beginning with almost fairy-tale like descriptions of Arcand and its people, and just keeps going. Joan's relationship with Victor is described quite poetically, you as the reader root for them to be reunited. The social commentary contained in the story is quite timely and cleverly done, something this author also did in her previous book. The ending feels a bit abrupt and dissatisfying though, but I think that was the only downside for me.

Recommendation:
A wonderfully engrossing read with representation we need more of.

Thoughts on the cover:
I love the black and grey image of the woods with the image of the green chair from Victor's dream state; the pink font of the title really pops against this.
Posted by Andrea at 1:22 PM