Give a Boy a Gun - Todd Strasser 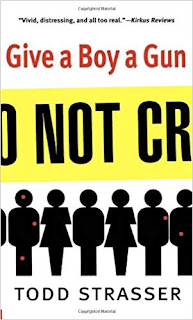 For as long as they can remember, Brendan and Gary have been mercilessly teased and harassed by the jocks who rule Middletown High. But not anymore. Stealing a small arsenal of guns from a neighbour, they take their classmates hostage at a school dance. In the panic of this desperate situation, it soon becomes clear that only one thing matters to Brendan and Gary: revenge.

Review:
I hadn't known that this book was actually published shortly after the Columbine shooting while I was still in high school. I think it would've been beneficial for me to have read it back then to help me make sense of things at the time.

As a teacher, every time we practice lock down drills I always explain to my classes about Columbine (it happened before any of them were ever born), and how that is the reason we now do these drills. Kids today are unfortunately so used to hearing about shootings, they're often surprised when I tell them that it wasn't long ago that they were relatively rare, and that being a teenager when Columbine occurred was a defining moment for my generation.

You can tell that this book is heavily influenced by Columbine: it takes place around the same time, the high school and town's name is very close to the name of the Colorado town where the shooting occurred, and the characters in the book even reference the Columbine shooters by name.

I appreciate that the author delves into multiple perspectives on the same incident by including statements from parents, teachers, classmates, counsellors, neighbours, etc. You see that kids can indeed fall through the cracks: there are details missed by one party that another picks up on, but there's no recourse or system to keep track of things like this and it goes by the wayside. It definitely strikes a chord with me as a teacher when we hit a wall with something related to a kid and can't help beyond a certain point because we've done all we're legally allowed to do.

The only part of this novel that I think hasn't aged well is the technology aspect. When this book was first published in 2000, smartphones didn't exist. We had cellphones back then, but they were basic Nokia-type bricks, not mini-computers that you could text message, record video, take photos, and search the internet. The widespread use of smartphones has definitely changed the landscape of today,  especially the invention of social media, and this novel's absence of it really does reinforce how things have changed in the past 10-15 years.

Recommendation:
This is a heavy story, but an important one. There are other books about school shootings that are more reflective of recent years, but I'd argue that this one is still important because it's indicative of the time in which it occurred.

Thoughts on the cover:
Seemingly benign until you notice the red dots on the figures.