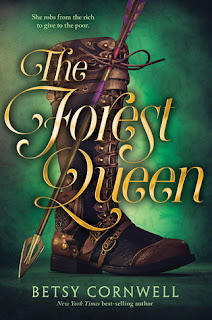 When sixteen-year-old Silvie's brother, John, becomes sheriff of Woodshire, she feels powerless to stop his abuse of the local commoners. And when John puts to marry her off, Silvie fears she will never see her beloved home again. She runs away to the forest with her dearest friend, a handsome young huntsman named Bird, and soon a girl called Little Jane, a midwife named Mae Tuck, and a host of other villagers join them. Together, they form their own community and fight to right the wrongs perpetrated by the king and his noblemen.

But even Silvie can't imagine the depths of depravity her brother is willing to sink to, until the terrible day she's forced to confront him. Can she overcome the evil in her own family in order to save the people of Woodshire, as well as the new family she's created for herself?

Perfect for fans of fairy tale retellings, this smart, gorgeously written take on the Robin Hood tale goes beyond the original's focus on economic justice to explore love, gender roles, the healing power of nature, and what it means to be a family.

Review:
I can honestly say I can't recall ever reading a Robin Hood retelling, let alone one that flips the genders to feature a female protagonist that isn't Maid Marian, so obviously I was curious about this one.

There were many aspects of the story I enjoyed. Silvie's privilege as a noble is called out and made aware to her, and she uses that to make change. Nature plays a prominent role in the novel, and its restorative powers are addressed. Feminine power is a big theme here, as is the role of mothers and nurturing. Toxic family structures (including sexual abuse and rape) and other darker themes are explored, but not in an overtly explicit way.

What I found lacking in the novel was that all of these themes and even character development tended to suffer as a result of the length of the story. The novel felt too short and everything seemed rushed along. I think if there were another hundred pages or so to add depth to some of these things, it would make them even better.

Recommendation:
The novel is too short, in my opinion, but its well worth the read nonetheless.

Thoughts on the cover:
I'm not sure why they thought a boot would be the best option for a cover image (the arrow is nice and fits with the story), but oh well.