The Best We Could Do - Thi Bui 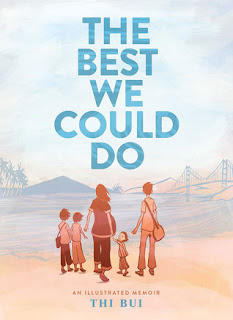 The Best We Could Do, the debut graphic novel memoir by Thi Bui, is an intimate look at one family's journey from their war-torn home in Vietnam to their new lives in America. Exploring the anguish of immigration and the lasting effects that displacement has on a child and her family, Bui documents the story of her family's daring escape after the fall of South Vietnam in the 1970s and the difficulties they faced building new lives for themselves. At the heart of Bui's story is a universal struggle: While adjusting to life as a first-time mother, she ultimately discovers what it means to be a parent - the endless sacrifices, the unnoticed gestures, and the depths of unspoken love. Despite how impossible it seems to take on the simultaneous roles of both parent and child, Bui pushes through.

With haunting, poetic writing and breathtaking art, she examines the strength of family, the importance of identity, and the meaning of home. The Best We Could Do brings to life her journey of understanding and provides inspiration to all who search for a better future while longing for a simpler past.

Review:
As the third generation of an immigrant family, this book spoke to me when I read the synopsis. I know my experiences (and obviously those of my Canadian-born parents) have been directly shaped by both my maternal and paternal grandparents and their decisions to immigrate to Canada over 60 years ago.

There's no denying that the immigrant experience is a powerful one, and the author does an incredible job of exploring both her mother and father's pasts and her own early life in Vietnam in the midst of the experience of giving birth to her first child. It's well known that becoming a parent leads one to seriously examine one's own parents; I know I called my mother sobbing and apologized for everything I had ever done shortly after the birth of my daughter because I suddenly understood exactly what it was like to be her in a way I had never fathomed before that point. The author wonders how much of her identity was shaped by her parents and their experiences, and how much of that (either positive or negative) will she potentially pass on to her son.

The graphic novel looks at each of her parents' backstories in Vietnam in the 1950s and 60s, the birth of her older siblings and herself, their escape in early 1978, and their resettlement in America a few months later. In effect, she does realize that considering the circumstances, her parents really did do the best they could for their children, sacrificing so they could have safety and opportunity while suffering from their own trauma. 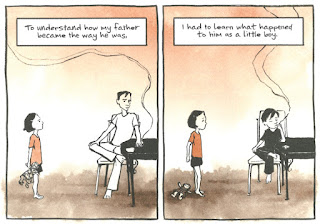 Recommendation:
A must-read; beautiful and a testament to strength and family.

Thoughts on the cover:
I like how everyone in the family except Thi (the little one) is looking forward while she's the only one looking behind, just as she's the only one taking a retrospective look at their past.
Posted by Andrea at 9:52 PM