The Librarian of Auschwitz - Antonio Iturbe 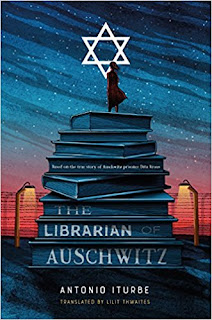 Based on the experiences of real-life Auschwitz prisoner Dita Kraus, this is the incredible story of a girl who risked her life to keep the magic of books alive during the Holocaust.

Fourteen-year-old Dita is one of the many imprisoned by the Nazis at Auschwitz. Displaced, along with her mother and father, from their home in Prague - first to the capital city's ghetto, then northward to the Terezin settlement, and now to Auschwitz in Poland - Dita is adjusting to the constant terror that is life in the camp. When Jewish leader Fredy Hirsch asks Dita to take charge of the eight precious volumes the prisoners have managed to sneak past the guards, she agrees, becoming the librarian of Auschwitz.

From one of the darkest chapters of human history comes an extraordinary story of courage and hope.

Review:
All I had to do was glance at the title to know I had to read this. Not only do I love historical fiction in general, books centred on the Holocaust just tend to have this pull on me that I can't resist.

The book opens in early 1944 with Dita describing the family camp in Block 31 in Auschwitz-Birkenau, a section where thousands of prisoners were allowed to keep not only their own clothes and hair, but also their families. This is a piece of history I hadn't been aware of, we tend to think that young children were killed immediately upon entering Auschwitz, so the idea that there were hundreds of small children kept alive there for months on end was fascinating to read about, even if it only existed as a front to the international community to disguise Nazi genocide.

Though flashbacks, we learn that Dita was put in charge of the eight books used in the makeshift school within Block 31 that had been smuggled into the camp. Of course this is forbidden, so Dita takes great risk in doing this. It gives her a sense of purpose, not only in taking care of the books so that others can use them, but also in reading them herself. We see this especially as the book progresses and circumstances become more dire: characters die, the individuals within the family camp are threatened with selections, as well as relocation to different camps. Dita gathers strength from stories, one in which parallels her journey to the end of the war when her camp is liberated.

I really appreciated the research that went into this book. Not only did the author track down some amazing primary sources in print, he was able to interview the real-life Dita, which I think gives the book a greater sense of legitimacy. I appreciate the inclusion of Fredy Hirsch's sexual orientation (still trying to figure out if the real-life Fredy was gay or not) and the moment Miriam has with Dita where she tells her that it doesn't matter if Fredy is gay or not.

The themes of what makes us human and how culture allows humans to thrive even in the midst of chaos and tragedy are touching ones. Characters question the point of the efforts of the family camp when, in the end, so many of the prisoners in them ended up dying anyway (no spoiler alert needed, we are talking about Auschwitz after all). The author postulates that if human beings aren't moved by beauty or able to activate their imaginations, then they are not complete persons, a thought which I tend to agree with.

Recommendation:
A beautiful, haunting novel that you have to read, especially if you're a fan of historical fiction.

Thoughts on the cover:
I love how the cover is set up with the barbed wire fence, the stack of books, and Dita at the top with the Star of David and how the books allow Dita to look over the camp fence.
Posted by Andrea at 10:28 PM