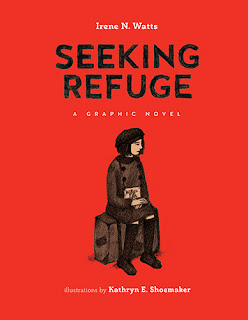 Eleven-year-old Marianne is fortunate. She is one of the first two hundred Jewish children in the heroic rescue operation known as the Kindertransport, which arrived in London, England in December 1938.

Life in the new country seems strange. Marianne's few words of English and her attempts to become an ordinary English girl are not enough to please her foster mother, who wanted a girl as a domestic servant. She deeply misses her family that she had to leave behind.

With the outbreak of World War II in 1939, Marianne finds herself being evacuated to Wales. She is shuffled from one unsuitable home to another - but there is a surprise in store, and Marianne's courage and resilience is finally rewarded.

The Kindertransport, which ultimately saved almost 10,000 children from Germany, Austria, and Czechoslovakia in the nine months preceding World War II, was a triumphant human effort. Marianne's story is based on the kind of events that were actually experienced by the children. Author Irene N. Watts was one of them, arriving on the second Kindertransport in December 1938 at the age of seven.

Review:
This graphic novel focuses on one of many experiences from the Kindertransport from Germany, and later of the child evacuations from Britain. Marianne Kohn is offered a spot on the Kindertransport and arrives in London at the end of 1938. She is placed with a family who only agreed to take in a refugee for the domestic help and to look good to their circle of friends, so needless to say they're not exactly concerned for Marianne's well-being, and even accuse her of embarrassing the family when her Jewish identity is brought up. The same experiences plague her when she is evacuated from London to Wales less than a year later when Germany declares war. Though this story has a relatively happy ending, I know historically that this wouldn't have likely been the case. The thing that stands out for this particular story is that it can be adapted in relation to modern day Syrian refugee experiences, except in this case one could argue that the shared experiences between historical Jewish refugees and modern day Syrian refugees (racism, hostility, culture shock, language acquisition, etc.) are faced by the whole family rather than just the children as shown in the story here.

The art style is where this book loses marks for me. The heavy pencil sketches and shading, while adding to the atmosphere and mood, don't really allow for appreciation of detail, and in some cases even makes it difficult to differentiate between characters when there are multiple people in a panel.

Recommendation:
A good choice of graphic novel to add to your historical fiction section, with lots of modern day applications if you choose to use it in a classroom setting.

Thoughts on the cover:
The dark pencil sketch of Marianne against the bright red background makes is nicely eye-catching.
Posted by Andrea at 11:02 AM