We Are Okay - Nina LaCour 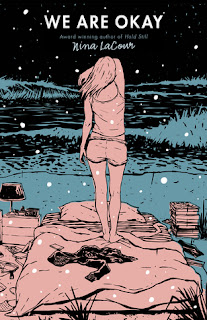 You go through life thinking there's so much you need...until you leave with only your phone, your wallet, and a picture of your mother.

Marin hasn't spoken to anyone from her old life since the day she left everything behind. No one knows the truth about those final weeks. Not even her best friend, Mabel. But even thousands of miles away from the California coast, at college in New York, Marin still feels the pull of the life and tragedy she's tried to outrun. Now, months later, alone in an emptied dorm for winter break, Marin waits. Mabel is coming to visit, and Marin will be force to face everything that's been left unsaid and finally confront the loneliness that has made a home in her heart.

An intimate whisper that packs an indelible punch, We Are Okay is Nina LaCour at her finest. This gorgeously crafted and achingly honest portrayal of grief will leave you urgent to reach across any distance with the people you love.

Review:
This book has been on many "must-read" lists recently, and once you start reading it's fairly obvious why. The writing is simple yet gorgeous, and the subject matter is raw and touching.

Marin's grandfather died a few weeks before she was supposed to leave her California home for college in New York. Already an orphan since her mother died when she was three, Marin feels even more lost than before. She lives, but barely, going through the motions so that she doesn't have to face  her feelings regarding the circumstances of her grandfather's death. It doesn't help that Marin left without a word, taking barely anything with her. Months later during winter break, Mabel comes to visit to encourage Marin to come home to live with her and her family permanently, but Marin just isn't ready to move forward yet. That would mean coming to terms with feelings she isn't sure how to process.

Nothing much happens in the book in terms of plot. Marin describes her mundane routines, the girls reminisce while cooking dinner in an empty dorm, they wait out a power outage, etc.  The emotional impact on the other hand is immense. Between this monotony of tasks there are flashbacks of the months when school ended up until her grandfather died, where relationships are revealed and Marin's current behaviour suddenly makes a whole lot of sense. There isn't a lot going on plot-wise, and I can see some readers being turned off enough due to boredom. But if you're willing to stick to it, you'll get a lovely emotional portrayal of grief and relationships that's worth the effort.

Recommendation:
Beautiful writing and a heartfelt story if you're the type that can get through a book focused more on emotional development than traditional plot.

Thoughts on the cover:
I adore this cover. Not only are the colours appealing, but the layering of images (Marin in her dorm in pink, the beach scene in the background in blue, and the snow in white) creates a nice, yet unsettling display.
Posted by Andrea at 10:24 PM