The Beast Is an Animal - Peternelle van Arsdale 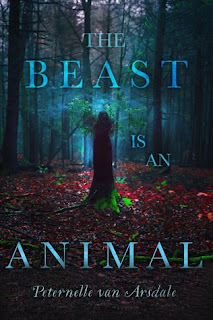 The Beast is an animal
You'd better lock the Gate
Or when it's dark, It comes for you
Then it will be too late

Alys was seven the first time she saw the soul eaters. Twin sisters, they radiated an energy that excited Alys. Through them she felt the wilderness of the fforest, and The Beast within it. Too late, she learned of their power to destroy.

By the time she is fifteen, Alys knows too much about both the lure and the danger of the soul eaters. She lives in a world of adults who are terrified of their power, and who cower behind high walls and grim rules. Fear of the soul eaters - and of The Beast- rules their lives. Even more, they fear the ways in which The Beast may lurk among them - and within a girl like Alys.

For Alys has a connection to the soul eaters, and The Beast. And she hides a truth about herself that she can reveal to no one, for fear she will be called a witch. As the threat posed by the soul eaters grows, Alys must undertake a journey through the wild danger of the fforest. But the greatest danger is not outside her. Alys' secret about who - and what - she is terrifies her most of all. And in order to save her world, she must also risk losing herself.

The Beast Is an Animal is an eerie, compelling, wholly original tale of far-flung villages, dark woods, and creatures that hunt in the night. It is also a deeply human story about a girl finding her way in a world that is ugly and beautiful, good and bad - and discovering the same within herself.

Review:
This is a strange book, but a very good one.

Alys' village is attacked by the soul eaters when she is seven years old, leaving alive only children under the age of sixteen (the author gives a backstory to the soul eaters early on, but I'm classifying it as spoiler territory so I won't reveal it here). With no one to take care of them, the children of Gwenith are taken in by the puritanical inhabitants of Defaid who view the tragedy in the nearby village as a warning not to stray from the path of righteousness. Defaid builds a wall around itself to both keep the soul eaters out and to closely observe the behaviour of its citizens. As Alys grows she learns to keep certain things to herself, like the encounters she's had with the soul eaters and The Beast, lest she be labeled a witch and killed or banished into the fforest (and yes it is intentionally spelled that way). As the situation worsens, Alys is charged with remedying things before they degrade further still, but not before she must escape Defaid for fear of her own life.

I have to give the author credit for creating a seemingly simple book that packs a punch in terms of allegory. The writing here is simple but highly evocative, bordering on magical realism. The underlying messages here are fairly easy to uncover but nonetheless important: that humanity is a mix of both good and evil (no one can claim to be purely angelic or devilish), and that the stories we tell about ourselves, and others, shape who we become. I especially love how The Beast is described with  a capital "I" like how we ascribe to God, it just reinforces the former point all the more.

Recommendation:
If you want to read something different, yet wholly satisfying that will leave you pondering, then read this. I'll definitely be adding this to my library at home.

Thoughts on the cover:
It is eerie and creepy and fits the feel of the novel oh so well. The tree-figure in the centre fits exactly with how the soul eaters are described.