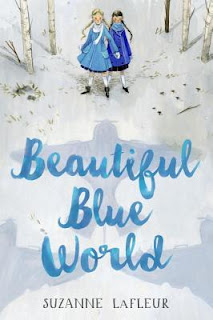 Sofarende is at war. For twelve-year-old Mathilde, it means food shortages, feuding neighbours, and bombings. Even so, as long as she and her best friend, Megs, are together, they'll be all right.

But the army is recruiting children, and paying families well for their service. If Megs takes the test, Mathilde knows she will pass. Megs hopes the army is the way to save her family. Mathilde fears it might separate them forever.

This moving and suspenseful novel is a brilliant reimagining of war, where even kindness can be a weapon, and children have the power to see what adults cannot.

Review:
This seemed like a very intriguing premise, so I decided to give it a shot. This tiny novel packs a powerful punch, being a cross between a WWII story (though set in a completely imaginary realm that simply reads like WWII Europe), and a version of Ender's Game minus the science-fiction aspects.

Mathilde lives in the southern town of Lykkelig in the country of Sofarende, which has been at war with Tyssia for over a year now. Now that Tyssia has brought their aerials into the country, they have started bombing raids at night. While Mathilde fears for her father during the bombings, whose committee must be on call once the sirens start, she is even more worried about the military test that she and her other classmates are eligible to take. The military is recruiting children for service, but no one has details on what they want the children for. For families that are struggling with fathers away and food shortages, the money the military offers families of the chosen children means that some opt to take the test to keep their loved ones alive. Like Mathilde's friend Megs. Mathilde's parents decide she should take the test as a way to guarantee her safety in the uncertainty of the war. When both girls take the test, the results are surprising, as well as the jobs the children perform while in service to the Sofarende military.

The comparisons to Ender's Game were screaming in my head as soon as Mathilde started writing the aptitude test. Thankfully the comparisons are relatively shallow and this novel manages to stand well on its own as a powerful insight on war, seen through the eyes of children. It is hauntingly beautiful at times, especially when Mathilde receives her "special assignment" and the interactions relating to it. The conversation Mathilde has with her mother before she leaves is one of those life lessons that is important but often left unsaid. The ending isn't very satisfying, but there is a sequel thankfully, so the story will continue (yay!)

Recommendation:
This would make for wonderful classroom reading, either as a read-aloud or a novel study in the older grades. Though it's a quick read and seemingly simple, the underlying messages are much more profound.

Thoughts on the cover:
I appreciate the blue colour scheme used in the image to mirror the title (which makes complete sense once you finish the book). The image of Mathilde and Megs abruptly stopped as the shadows of the aerials are seen on the ground is a powerful one, and reminds readers that this story doesn't sugar-coat the realities of war.