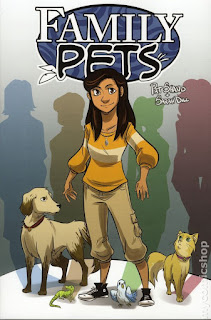 Ever since her parents died on her fifth birthday, Thomasina has been daydreaming that something amazing will happen in her life to make up for everything she's been through.

After turning sixteen, Thomasina begins to accept that her life will remain unremarkable...but when she wakes up one morning to discover that her foster family has been turned into pet animals, her ordinary life will turn into an extraordinary adventure!

Review:
I hadn't read some good graphic novels in a while, hence the plethora of graphic novel reviews lately, so this was yet another to add to the pile. Family Pets is a short but cute all-ages comic that everyone can enjoy.

Thomasina's parents died when she was five, and she's been raised by her grandmother (Abuela in Spanish) ever since. The two of them now live in the basement of her aunt and uncle's house, but you'd never know she lives with family the way her aunt, uncle, and cousins ignore her.

Like most kids, Thomasina has been raised on the same books that give way to the dream that a mysterious person will show up at your door to tell you you're magic or otherwise special and take you on a great adventure. Thomasina has mostly given up on that hope until one morning when her pet snake Sebastian turns into a human while her uncle, aunt, and cousins turn into household pets. When Thomasina, Abuela, and Sebastian try to discover how this has happened, the race is on to undo the spell cast on her family before they remain animals permanently.

The artwork for this series is really appealing, the characters have very defined faces and expressions, and even the animals are well drawn. I enjoyed all the characters, but Sebastian really stole the show for me, he's hilarious. This volume is a one-shot as far as I can tell, so things move rather quickly and some plot points are a little rushed, particularly the ending, but hopefully the creative team will choose to continue it because I would definitely read more from this universe.

Recommendation:
An all-ages appropriate story with diverse characters and an engaging storyline. This would make a great addition to a classroom library or a choice for readers just getting into graphic novels.

Thoughts on the cover:
I like the spotlight on Thomasina (this is the only colour illustration we really see) with the family members as pets around her with their human silhouettes in the background. I will Sebastian or Abuela or even Smitty could've been added into the picture but I can see why they chose the image they did.
Posted by Andrea at 10:04 AM