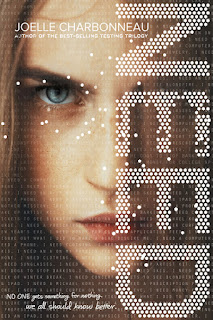 What do you really need?

One by one, the teens in Nottawa, Wisconsin, join the newest, hottest networking site and answer one question: what do you need? a new iPhone? Backstage passes to a concert? In exchange for a seemingly minor task, the NEED site will fulfill your request. Everyone is doing it. so why shouldn't you?

Kaylee Dunham knows what she needs - a kidney for her sick brother. She doesn't believe a social networking site can help, but it couldn't hurt to try.

After making her request, Kaylee starts to realize the price that will have to be paid for her need to be met. The demands the site makes on users in exchange for their desires are escalating, and so is the body count. Will Kaylee be able to unravel the mystery of who created the NEED network before it destroys them all?

Review:
I fell in love with the author's previous series, The Testing trilogy (The Testing, Independent Study, and Graduation Day) so when I found out she had a new one-shot book coming out, I knew I'd be picking it up. Unfortunately the book didn't quite deliver in the way I was expecting.

The premise is promising: a town where a new social networking site appears exclusively to the teenage inhabitants, the site promises to grant requests they submit if they fulfill certain conditions, and the heroine of the story has a brother with a failing kidney and needs a transplant with no willing donors. Bang, I was hooked and read on waiting for this story to blow me away. But a couple key things got in the way.

First off, I teach teenagers, they are not as stupid as some people think. There is no way an entire school of them (especially the older ones) would fall for the premise of the NEED network in the first place, let alone get so swept up in it that people would start dying. Not realistic at all. Most kids know nothing in life is free and are suspicious of anything claiming otherwise. I could buy a handful, maybe 20-30 max out of a whole school buying into the concept and spreading mayhem in real life, but not close to 700 like the book explains. Nuh-uh, would not happen. So my suspension of disbelief was already not co-operating by this one fact alone.

Second of all, the creation of the NEED network itself and why it was created isn't realistic either, at least not in a modern setting. I can't divulge much for fear of spoilers, but it goes into the tin-foil hat conspiracy territory. I could've bought it under different conditions (sic-fi or dystopian setting where there are few limits placed on governments for example), but not in the modern setting the author chose.

Thirdly, there were way too many points of view. There are 10 different points of view in the entire book, starting out with Kaylee and alternating between various other characters. I could barely keep track of them all let alone identify with them. I understand the way the story is structured one would need to look at a point of view or two beyond the main protagonist (Kaylee) to see the motivations of the others involved in the NEED network, but having 10 is overkill, 2-4 would have been more manageable if done well.

Recommendation:
A great premise but not executed well for the reasons above. I know the author is capable of great stories, so I will just assume this one was a fluke and wait for her next book.

Thoughts on the cover:
Well done in my opinion. Kaylee's face is on one side with the title down the other. It's hard to tell in a picture but there's computer-type font goings across the cover with all the "needs" the users wrote on the website, which is quite a nice touch.
Posted by Andrea at 1:06 PM