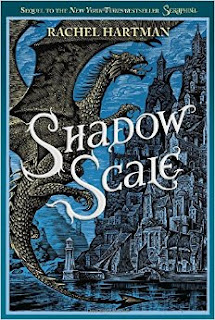 Seraphina is tangled amid the grapple for power between the dragon rebels and the human court. The dark secret of her true identity - half-dragon, half-human - has now become her advantage. Only she has the power to unite the kingdom of Goredd, and she intends to use it. She scours the land for the rest of her half-dragon brethren, whose unique gifts may make the difference in the struggle.

But gathering her people is no straightforward task, and the more Seraphina learns, uncovering hidden histories and outright lies, the more she comes to realize that someone is working against her. What hope is there for brokering peace between dragons and humans when one of her own is determined to see both worlds go up in flames?

William C. Morris YA Debut Award-winner Rachel Hartman continues Seraphina's story with an adventure that will chart new frontiers of the soul.

Review:
I read Seraphina years ago and adored it to pieces, so picking this up was a no-brainer. The spectacular writing and amazing world-building that I loved in the first novel is still present here, but (and it absolutely pains me to write this) unfortunately this sequel just doesn't live up to the reputation of its predecessor.

The novel opens up a few months after the first book left off, with Glisselda as queen in the midst of a  burgeoning civil war between humans and dragons after years of peace. Seraphina, with her unique position in the court and being half-dragon, is sent to various areas of the country to locate other half-dragons in hopes of recruiting them to fight the dragons. Jannoula, the villain who can control the minds of other half-dragons, has more of a presence in this novel as she works towards her own agenda. The first half of the novel is concerned with Seraphina travelling and interacting with the other half-dragons. This part, though rich with great characters and world-building, was a bit dull overall. The pattern of searching for the ityasaari, finding them,  then overcoming the obstacle Jannoula presents repeats across several destinations with no real effect on the civil war back home in Lavonadaville. I would've preferred a focus on the war, the spotlight on the ityasaari, while intriguing, didn't hold my interest.

My other issue comes in the second half of the novel when Seraphina comes home and everything comes together. The romance between Seraphina and Lucian Kiggs, while very sweet in the first novel, makes my jaw drop in this one. I understand Kiggs' behaviour (but don't excuse it), he's betrothed to Glisselda and conflicted between his royal duty and his passion. But Seraphina, who never struck me as a naive girl with no spine, sure acts like one in relation to Kiggs, which knocks her down a couple pegs in the "outstanding YA female protagonist" category. I just couldn't believe she was happy to relegate herself to the role of mistress rather than focus on her music and find someone who could actually be dedicated to her as a partner. And the strange proclamation of love from Glisselda was just strange and abrupt with no closure. I felt the whole romance aspect was like a disorienting smack to the face and feel there should have been more novel dedicated to this.

Recommendation:
Still amazingly well-written with a great world to get sucked into, but with a more dull plot and romantic elements that made me shake my head, readers are probably better off sticking with the first novel.

Thoughts on the cover:
Quite nice, and I like how they kept it in theme with the first novel's cover.
Posted by Andrea at 2:06 PM