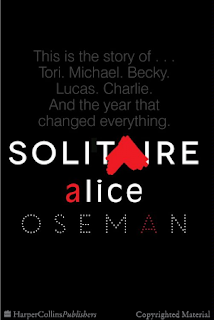 My name is Victoria Spring. Sometimes I hate people. This is probably very bad for my mental health.

Tori has friends. She has brothers. She has parents. Sometimes she can be bothered to talk to them. Most of the time, though, she would prefer not to have to deal with other people.

Until the day she follows a trail of Post-its from her locker to a deserted computer lab, where she finds a message from a mysterious group called Solitaire. It's also where she meets Michael Holden. Irrepressibly cheerful, weird, and determined to be her friend, Michael is everything Tori normally hates.

And that's it. That's where it starts.

Soon Solitaire has launched a series of pranks across the school. For once, Tori feels connected, like someone is on her wavelength - making jokes about her favourite movies, blasting her favourite song on repeat over the intercom. Then Solitaire's pranks start to go too far, and no one else seems to be concerned. Tori doesn't like getting involved. But this time,the idea of doing nothing is even worse.

Solitaire is a novel about finding friends, finding yourself, and discovering that one person can change everything.

Review:
This is a coming of age novel that sparked my interest when I read the blurb a while ago. What really stood out was not only that this was a debut novel, but that the author wrote this while still a teenager herself.

Tori is a fairly normal sixteen-year-old girl, but a bit of a downer. She's caustic, pessimistic, apathetic, and critical of practically everyone. She hates reading but enjoys movies, blogging, and her younger brothers. One day while trying to escape a conversation with her friends about Harry Potter fandom, Tori follows a trail of post-it notes to an old computer lab where she uncovers an empty blog called Solitaire, while at the same time meeting Michael Holden, who is odd, spontaneous, sweet, and everything Tori is not. As Tori and Michael get to know each other, Solitaire begins staging pranks around the school that seem to relate to Tori and her interests, like photoshopping the headmaster's head onto a Star Wars character on screen during an assembly, and playing Madonna's Material Girl over and over again on the intercom. Soon the pranks turn a bit darker, like encouraging a group of students to get revenge on the homophobic bully who beat up Tori's younger brother, Charlie. When several students including Tori are hurt during a Solitaire gathering gone wrong, she decides to get to the bottom of who or what Solitaire is.

Though Solitaire as a group takes up a good chunk of the plot and conflict within the book, this is largely a character-driven novel. Tori, though not the most likeable character, is by far the most realistic. I feel like Tori could be any one of my students, and I'm pretty sure a lot of my students could pass for Tori any day of the week. Michael is just irksome in the sweetest way, and I feel his character was very well done. I like how the author even had a bit of a focus on Charlie and his battle with mental illness, an eating disorder, and suicide, while also being gay (yay for more LGBTQ characters in YA). Also, I have to give the author credit for the lovely geeky references throughout the book: Harry Potter, Sherlock, Dr. Who, plus she managed to work in Beauty and the Best to boot (she included all my favourites), and managed to insult Pride and Prejudice (though I'm an English teacher and a literature major it's well established that I dislike Jane Austen's works).

Recommendation:
A wonderfully realistic look at an apathetic teenager and what it takes to get her to wake up to those around her. If you can tolerate Tori as a character, you'll be in for a great ride.

Thoughts on the cover:
The version I have is okay, but I'm more fond of the other covers I've seen circulating online.
Posted by Andrea at 8:33 PM