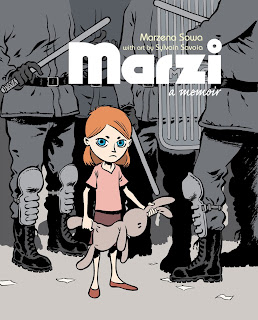 "I am Marzi, born in 1979, ten years before the end of communism in Poland. My father works at a factory, my mother at a dairy. Social problems are at their height. Empty stores are our daily bread. I'm scared of spiders, and the world of adults doesn't seem like a walk in the park."

Told from a young girl's perspective, Marzena Sowa's memoir is a compelling and powerful coming-of-age story that portrays the harsh realities of life behind the Iron Curtain while maintaining the everyday wonders and curiosity of childhood. With open and engaging art by Sylvain Savoia, Marzi isa moving and resonant story of an ordinary girl in turbulent, changing times.

Review:
I love stories of people growing up in extreme circumstances, especially graphic accounts (a lot of the time you need a visual to truly understand some of the content). I think they're especially important for our students to read, partly to understand that not everyone around the world grows up like they do, and partly to realize the things that happened under communist regimes so we can prevent them from happening again.

Marzi is similar to other accounts I've read of children growing up in communist or militaristic regimes, but unique in that I've never read one that takes place in Poland. Marzi begins with the author recounting her early years (I'm guessing around age 5 or 6 when it starts) in a series of vignettes that illustrate linear events from her childhood, ending shortly after the fall of communism when she is 10 or 11 years old.

The story did lag in some parts, and didn't have as much political commentary as I expected, but was still a worthwhile read. The artwork is beautifully drawn, and the accounts coming from a child's perspective are actually from a child's mindset. The instances where Marzi and her parents line up at stores and overbuy items for fear they'll run out and go without are some that you can use to explain the differences in types of government for kids, they will likely understand that moreso than the latter examples of her father striking with other workers and locking themselves up in the factories.

Recommendation:
Excellent account of growing up in a communist country, lags in some parts but worth the read.

Thoughts on the cover:
I like the juxtaposition of Marzi with the soldiers behind her, and the fact that she's in full colour, including her eyes (they're usually coloured grey in the actual book) echoes to a Schindler's List effect.
Posted by Andrea at 1:14 PM