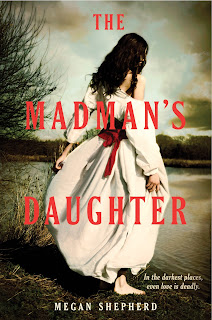 Sixteen-year-old Juliet Moreau has built a life for herself in London-working as a maid and trying to forget the scandal that ruined her life. After all, no one ever proved the rumors about her father's gruesome experiments. But when she learns he's alive and continuing his work on a remote tropical island, she's determined to find out if the accusations were true.

Accompanied by her father's handsome young assistant, Montgomery, and an enigmatic castaway, Edward, Juliet travels to the island, only to discover the secret of her father's new life: he experiments on animals so that they resemble, speak, and behave as humans. Torn between horror and scientific curiosity, Juliet knows she must end her father's dangerous experiments and escape her jungle prison before it's too late. Yet as the island falls into chaos, she discovers the extent of her father's genius-and madness-in her own blood.

Inspired by H.G. Wells' classic, The Island of Doctor Moreau, The Madman's Daughter is a dark and breathless Gothic thriller about the secrets we'll do anything to know and the truths we'll go to any lengths to protect.

Review:
I picked this up purely because of the association with The Island of Doctor Moreau. I thought this would be an awesome YA gothic thriller, and as soon as I started reading and was introduced to Juliet, I got even more excited because she's such an awesome female character. Sadly, although Juliet does rock my socks, and the plot has a ton of potential for being a true gothic thriller, I felt the story became too focused on the romance to the point where things just dragged on.

The book begins with a bang, describing Juliet's situation in London and her encounters at the university. Once she and Montgomery are on the ship and Edward appears, the dreaded love triangle comes into play (why, why must every YA book have a freaking love triangle?!) Everything afterwards seems to just slow down and fizzle out, Juliet waxes poetic over the attributes of both Montgomery and Edward (and in cliche fashion she swings completely from one to the other) and I just wanted to know what happened to my smart, sassy, focused Juliet and who replaced her with a vapid chick that ignores the danger and moral dilemmas around her and to instead focus on whose hands would feel better around her.

Not that I don't like love triangles, but they need to be well done and actually integral to the plot. Plus it's just not believable that Juliet would become a love-struck hormone mess in the midst of everything on the island. Again, the plot has a lot of potential but gets lost along the way.

The ending is very abrupt (fitting since this is the first book in a trilogy), but even knowing that it felt like a cop-out ending. I'll give the next book a try before I dismiss this series entirely.

Thoughts on the cover:
Love it. The model and the pose looks like it belongs on an adult book, it's just very eye-catching in a subtle way.
Posted by Andrea at 9:10 PM