Out of Reach - Carrie Arcos 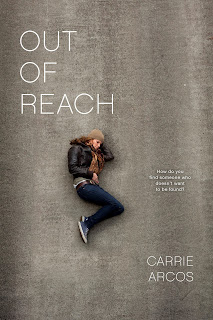 Rachel has always idolized her older brother, Micah. He struggles with addiction, but she tells herself that he's in control. And she almost believes it. Until the night that Micah doesn't come home.

Rachel's terrified-and she can't help but feel responsible. She should have listened when Micah tried to confide in her. And she only feels more guilt when she receives an anonymous note telling her that Micah is nearby and in danger.

With nothing more to go on than hope and a slim lead, Rachel and Tyler, Micah's best friend, begin the search. Along the way Rachel will be forced to confront her own dark secrets, her growing attraction to Tyler...and the possibility that Micah might never come home.

Review:
This book was a finalist for the National Book Award, and since in my experience any book that gets some kind of recognition from that particular award is usually pretty good, I decided to give it a go.

Out of Reach takes place over the span of 24 hours in which 16-year-old Rachel attempts to search for her meth-addicted brother Micah who disappeared several months before. In addition to the search going on in Ocean Beach amongst the druggies and the dealers, we get flashbacks every so often of Rachel and Micah when they were kids that show their close relationship.

I liked how Rachel and pre-meth Micah were portrayed as completely realistic teenagers (they could easily be students in my own classes), and how friendly the sibling relationship was and the bond between them. I especially liked that even though the romantic subplot between Rachel and Tyler was only a tiny part of the story, that the romance didn't feel absurd or forced, and that Tyler was a pretty respectful guy, so that got a thumbs-up from me.

There are reviews that claim dislike for this book based on Rachel's actions regarding Micah, particularly how they feel she didn't try hard enough to find him or that she waited so long, and therefore is unrealistic of a sister who seems to be so close to said brother. I can understand that viewpoint, but I didn't feel that about Rachel at all. Perhaps it's because I've had personal experience in dealing with highly toxic and dysfunctional individuals (a lot of them family, a few with addictions of various sorts) and have done a slough of reading about the addict's mentality, how family members react, and have gone through that obsession that you can somehow save them from themselves and can get them to see reason if only you tried harder, that I can understand exactly why Rachel did what she did.

Anyone who's ever been through the process like I have eventually comes to the realization (and it took me a good long while) that you can't change anyone's behaviour but your own, and although you can arrange help and resources for the person that needs it, they are ultimately responsible for making the decision to actively seek out that help to get better, you can't put a gun to their head and force them if they don't see their own problem. I can read between the lines and see that Rachel has already been through those motions with Micah. She talks about the stint Micah had in rehab and when her family went to see him, how she was already coming to terms with the fact that the brother she loved wasn't there anymore. How she did have immense guilt over not telling her parents sooner, or searching sooner, but knows deep down that it really wouldn't have helped anyway (and really, she was barely sixteen, it's not exactly like she has the resources to be the sole saviour of her brother anyway). There's all the background information that came before the events in the book that we only see glimpses of through the flashbacks that culminates at the end when Tyler and Rachel are in the church where Rachel finally realizes that drugs (and anything else that consumes a person so deeply) are a horrible thing that sometimes happens to families and friends and takes away people you care about, and that you are so desperate for some semblance of control that you cling to it where it's impossible to impose it.

I think the author does a wonderful job of portraying the feelings and consequences of having an addict in the family but does so in a bit of a crash-course, and I think the seemingly quick way that Rachel comes to terms with things is what confuses readers and reviewers. But that switch inside a person where they go from caring to the point of self-destruction themselves to accepting the things they have absolutely no control over (hence the use of the Serenity prayer in the book) can sometimes flip very quickly and it doesn't flip back. I think if the author had shown more of the flashback moments where the family struggles with Micah in the early days of the meth addiction then Rachel's actions might be less criticized by readers who have never been through this kind of struggle. But I applaud the efforts of the author regardless of the condensed result.

Recommendation:
Excellent portrayal of the effects of having an addict in the family. Very real characterization and interactions, along with good writing. One of those "difficult topics" books that kids should read.

Thoughts on the cover:
Doesn't really have much to do with the story itself (would have been more appropriate if the model was supposed to be Micah wearing summer clothes, they are in southern California in the summer), but is different for a YA book and makes you stop and look.
Posted by Andrea at 10:03 AM